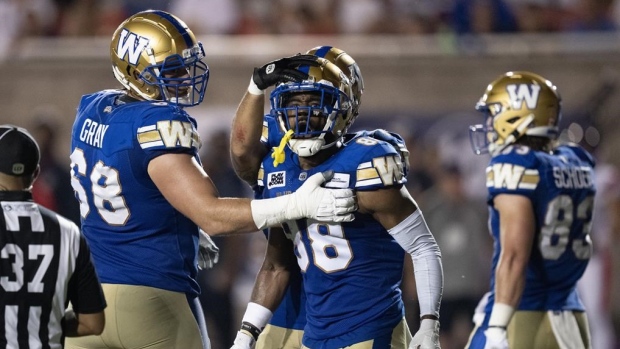 The Blue Bombers (9-0) went through with three touchdowns to take a 35-20 win over the Montreal Alouettes at Percival Molson Stadium on Thursday.

Dakota Prukop restored Winnipeg’s lead on a one-yard sneak. Janarion Grant then threw a cold shower on the home crowd with a 57-yard punt return. Brady Oliveira sealed the win with a late rush of six meters.

“I think this is the toughest situation our guys have been in,” said Bombers head coach Mike O’Shea. “Full marks to Montreal, they took the ball early and often and our guys just kept grinding and digging.

“I think Janarion’s punt return touchdown, the timing on that is right on time.”

After six games on the road in their first nine and not even a bye week, the Bombers were expecting a physical game in Montreal. The Alouettes defense reached quarterback Zach Collaros, giving the Bombers just seven points in the first half.

“It was physical. It was as tough a game as it got,” said O’Shea. “It was humid, hot. They were very physical. They brought it and our guys were very responsive which is what you would expect from our guys. That’s what they expect of themselves.”

Oliveira described the game as “a dogfight,” adding that all three phases of the team contributing were a big factor in keeping Winnipeg’s undefeated record intact. For the running back, “the grind” was a motivating factor for the team looking for a third consecutive Gray Cup.

“It was definitely a grind,” he said. “It was a tight game. For most of the game on the sidelines there was so much faith and that word grind, like just fall in love with the grind, embrace the grind. And that’s exactly what we did.”

The Alouettes (2-6) came up against the Bombers physically, but the loss nevertheless stung.

“Of course this loss hurts. It hurts how we reacted after the touchdown when it was 14-14,” said Alouettes head coach Danny Maciocia. “We can’t take a little setback and we look for problems.

“I think we need to get back to work and look at everything and make decisions that give us a chance to solve those problems and get some wins.”

Montreal will get a shot at redemption next week when they travel to Winnipeg to defeat the Bombers in the second of back-to-back matchups.

“We expect the same kind of football, we expect a physical rematch at IG Field,” said defensive lineman Willie Jefferson. “We know they will come to get us back because we beat them at home. It’s going to be a tough game.”

The Alouettes shocked the Bombers on the first drive of the game when Wesley Sutton intercepted Collaros and immediately put Montreal in scoring position.

However, the Winnipeg defense limited the damage to a field goal as David Cote put in a 24-yard attempt through the uprights for an early 3-0 lead.

Cote followed that with a 49-yard field goal to narrow the Bombers’ lead to one.

The Alouettes gave Winnipeg a touchdown chance with a pyramid-shaped penalty on a field goal, giving the Bombers another run of downs. Collaros scored his second TD of the evening with a five meter pass to Rasheed Bailey.

Tyson Philpot helped Montreal equalize on the next drive. The rookie returned the Winnipeg kickoff 60 yards and two plays later, he caught Harris’s pass into the backfield and swung through the defense to score Montreal’s first touchdown. Dominique Davis rushed into the end zone for the two-point conversion to make it 14-14.

Grant returned Montreal’s punt 57 yards all the way into the end zone for the fourth touchdown of the night for the visitors.

The Bombers capped off their dominance in the fourth quarter with a six-yard rush through Oliveira.

The Alouettes added a late touchdown when Davis Reggie White Jr. on a 20-yard pass.

This report from The Canadian Press was first published on August 4, 2022