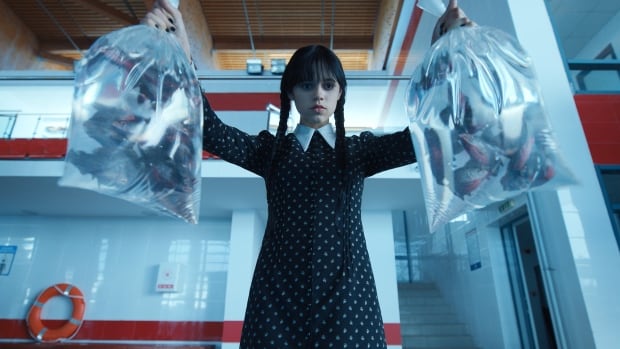 The Addams family is perhaps the most unlikely artistic creation to spawn an expanded universe. Created by accident by an accidental cartoonist, the characters who appeared in Charles Addams’ standalone cartoons for The New Yorker were initially not a well-defined family at all.

Instead, they were just frequently changing faces, macabre imaginings of a lovely, charming man – who happened to decorate his home with medieval crossbows and married his third wife in the nearby pet cemetery.

The cartoons themselves reflected that strange balance: a gentle kindness enriched with a somehow endearing violence; a smiling Lurch, Gomez and Morticia pouring boiling oil over carols; the happy family fishing on the beach, while terrified swimmers run away from whatever Gomez managed to snag.

While those characters appear in only about 80 of Addams’s thousands of works, they remain what he is best known for. It was that unique blend of both childish and terrifyingly mature (reflected in contemporary Edward Gorey’s The Gashlycrumb Tinies and other work, but not much else) that led to an eventual TV series – 1964’s The Addams Family, which eventually led Addams to figure out those characters’ names and relationships with each other.

What follows are eleven mainstream remakes and reimaginings (not counting the video games) of the creepy, wacky group – as with the first panned, then cult-favorite Broadway musical, and the almost all-Canadian The new Addams familycanceled after one season.

Wednesday’s Jenna Ortega on creating the character – and that dance

Wednesday from Netflix brings back The Addams Family, but this time with a focus on its precocious offspring, Wednesday. Lead actress Jenna Ortega talks to CBC News about how she created the character and that dance scene.

But each time, the family’s success is defined by their ability to follow the formula: to capture that somewhat unpleasant atmosphere, rather than go with the studio impulse to tone down the horrific for an audience of children. . Because what Addams was trying to do with his family of gothic outcasts was always painfully obvious.

“He was very scared,” Addams biographer Linda Davis told NPR. As she explained, make The Addams family series “was the smartest thing to do psychologically. Because he defused them by provoking and fooling his fears.”

The series follows a trend that started in the 1991 film The Addams family of focusing more on the young siblings – though Pugsley (Isaac Ordonez) recedes so far into the background you’d hardly know they’re casting the part. And coincidentally, Charles Addams grew up in, and took inspiration from, Westfield, NJ – the same town where the real-life events of Netflix’s equally creepy The viewer took place. But again, instead of focusing on the familiar, the setting drifts.

We follow Wednesday Addams – played by Jenna Ortega, whose appearances in scream and X this year they help cement her as franchise horror queen – after she gets kicked out of a normal school for trying to kill a classmate with piranhas, before being sent to Nevermore Academy. The school is her parents’ alma mater and home to all kinds of “outcasts” – including werewolves, sirens and one of the most predictable villains since The incredible things 2.

That fish-out-of-water plot leads to some of Wednesdaybiggest shortcomings. While the setting draws her parents Gomez (Luis Guzmán) and Morticia (Catherine Zeta-Jones) into the story a bit, Wednesday struggles with an overbearing mother who makes her “nauseous, not in a good way,” and is forced to unleash a mystery about their time at school – they are more out of the story than they are in it.

Actors Luis Guzmán and Fred Armisen play Gomez and Uncle Fester in Netflix’s Wednesday. They tell where they got inspiration from updating those well-known characters.

It also sacrifices Zeta-Jones’ fantastically dark show, one of the series’ few outstanding performances, though that’s not one of the show’s two main problems.

The real problem is that the deleted setting more often than not places Wednesday around teenagers who all have supernatural attributes, sacrificing the series’ inherent point; because when you go to Hogwarts, no one will be surprised by your wand. And, as Vulture wrote in their list of the 50 best TV shows for the whole family, The Addams’ Familys “endlessly repeated joke (and insight) was that the common people were the real eccentrics.”

That leads to the second problem. Though under the thumb of creator/director Tim Burton (whose The nightmare Before Christmas and Edward Scissorhands are probably the best examples of the style) there’s a Netflix shine to it Wednesday that beats The Addams Family‘s goal.

Alongside a cast of teens whose storylines seem so plucked out Descendantseverything in it Wednesday‘s Nevermore Academy feels overproduced and almost painfully packaged for a modern audience. It falls victim to the misguided desire to appear current, sacrificing the intended timelessness of The Addams’ cobwebbed, gothic home.

Instead, we get 2022 references that give 30 Rock“How are you, fellow children?” run for his money. At one point, Wednesday’s roommate actually tells her, “Most people spend their whole lives pretending to give zero F’s, and you’ve literally never had an F to give” in a show that’s supposed to feel really unusual .

But while the teen drama swirling around her feels old, Wednesday is saved by every second she spends on Wednesday herself. Because Ortega’s expansion of a character that started out as a one-note supporting foil is what HBO Max is Scooby do Restart, Velma, wish it could be.

Flanked by Christina Ricci (who played the character in the ’90s remake and absolutely nailed Ortega’s droll delivery) in a supporting role, Ortega has probably become the definitive Wednesday. Without straying from that trademark monotony, she manages to be equal parts empathetic, menacing and hilarious. For example:

“You’re like a cockroach,” another character says in an attempt to insult. “Please,” she replies flatly, “flattery won’t get you anywhere.”

That performance (alongside a fantastically weird dance that Ortega himself choreographed to CBC News) is magnetic, complex, and gives Wednesday a reason for existence.

But almost everything away from her struggles – especially in terms of acting. Fred Armisens much-discussed Fester is an oversized clown, Guzmán’s Gomez seems tired – even though he received the inaugural Raúl Juliá award earlier in his career, named after his fellow Puerto Rican who played one of the most famous versions of Gomez Addams.

Many of the teen character actors seem to have dropped out of unused Disney channel shows; Canadian Percy Hynes White – fresh from Chandler Levack’s phenomenal I like movies – is the exception there, although writing for his character does him no favors.

LOOK | Percy Hynes White is surprised by his career:

Percy Hynes White starring on Wednesday: ‘I never expected to be here’

Canada’s Percy Hynes White stars in the new Netflix series Wednesday, the latest iteration of the iconic Addams Family. He says he never expected his career to go this far.

Is Wednesday worth watching? Of course, and if you like this style, you will probably even have fun. It’s almost like an original piece of art mass-reproduced for a gift shop – and it’s encouraging to see something that challenges conventional storytelling in a post-Marvel world. But in bringing back the Addamses (especially with a cast as studded with stars as these) you can’t help but feel a little depressed imagining what was possible.

“Who is this for?” is a question you often hear when talking about new shows because of how we usually think about audiences. We want clearly defined categories for adults or children, an idea The Addams family series threw out the window – that’s what makes it so original. You can’t sacrifice the playfulness in trying to emulate it, but you certainly can’t sacrifice the legitimate darkness – or their critique of normalcy.

If you don’t fully commit to it, you will fail. And unfortunately, Wednesday – apart from Ortega – doesn’t seem to understand that.