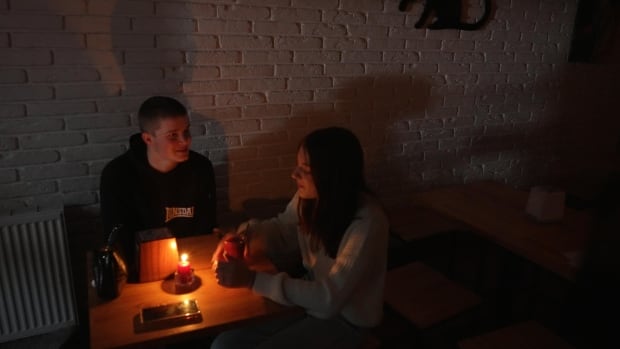 The western Ukrainian city of Lviv, along with much of the rest of the country, was plunged back into darkness and cold Wednesday after another devastating barrage of rocket attacks fired by Russia.

Western Ukraine’s energy infrastructure was already in a critical state after the launch of more than 100 missiles by Russian forces in the week of Nov. 15 seriously compromised transmission and distribution networks.

A CBC News crew recently visited the region and witnessed the disruption the Russian attack has had on these communities and their people — and how winter itself can become a deadly force in the conflict.

The cumulative impact of the strikes has caused millions of Ukrainians to lose the refuge provided by their homes. Instead, those who have lost warmth and light are increasingly turning to communal places to find comfort and companionship, a way to counter the psychological devastation of Vladimir Putin’s war against their country.

‘A different kind of house’

In Lviv, Pekar cafe and bakery is one such haven.

With access to an industrial generator from a nearby hotel, Pekar can keep the lights on and the water running when other businesses and homes are hit by frequent blackouts.

“It’s reassuring to have people around you who can support you during these times,” said Ira Zayats, a software developer, who told CBC News that she regularly visits the bakery on Akademika Hnatyuka Street.

“It turns a bad day into something very, very positive. It’s like coming into a different kind of house.”

Lviv is only about 70 kilometers from the border with Poland and has never been in serious danger of a Russian ground attack.

Nevertheless, the city’s electrical infrastructure is one of the hardest hit by Russian missile strikes.

During his recent visit, CBC News witnessed progressive blackouts. Some lasted minutes, while others lasted hours.

When the power outage is scheduled, many businesses prepare to close, but during sudden power outages, others will continue to operate in the dark.

People eat their meals in candlelit restaurants; shop assistants sit behind non-functioning cash registers in stores and only accept cash until power returns.

With no light from streetlamps or storefronts, car headlights often provide the only eerie illumination in the darkness.

The threat of winter

A map from the country’s largest transmission company shows the worst damage to the power grid: the capital Kyiv, eastern villages near the newly liberated city of Kherson and parts of the country’s western region continue to experience blackouts.

“I’m very concerned about them [Russia’s military] will do enough damage to be blacked out for weeks,” Zayats said. “I think that will bring the economy to a standstill. I just choose to believe that we will persevere.”

The World Health Organization shares those concerns, saying winter could be “life-threatening for millions of people in Ukraine” pronunciation earlier this week. “The devastating energy crisis, increasing mental health emergency, limited access to humanitarian aid and the risk of viral infections will make this winter a formidable test for the Ukrainian health system and the Ukrainian people.

He has called the shelters”invincibility centers.”

Earlier, Zelenskyy had said that up to 10 million Ukrainians are experiencing blackouts of varying duration. And the state of the country’s power grid remains critical.

Even before the last missiles hit, Volodymyr Kudrytski, CEO of Ukrenergo, Ukraine’s national energy company, had said that the country’s power stations were no longer able to power the entire country 24 hours a day.

Kudrytski said at a news conference on Tuesday that the rocket attacks caused “colossal” damage, destroying or damaging 15 power plants.

The utility, he said, had already installed several backup transformers — secretly tucked away and kept separate from the main power plants — but he noted that Russia hit some utility stations between five and eight times.

Rocket attacks have left the Ukrainians without heat and electricity

Russia continued its campaign of missile attacks on Ukrainian cities, leaving the Ukrainians struggling to find warmth due to power outages.

Ukraine is now urgently looking for replacements abroad. And while countries like Spain, Belgium, India and China all have transformers that Ukraine can trade in for damaged ones, finding the right one can be a difficult process, Kudrytski said.

“The task is not only to find the powerful transformer, but also to find the right voltage,” he said.

In Kiev, which suffered extensive damage to its power grid, authorities said the capital had gradually rebuilt its energy capacity ahead of Wednesday’s round of rocket attacks, although there are still continuous blackouts, sometimes lasting eight hours or more.

But it is in Kherson where the situation is perhaps most dire.

“There is a complete blackout in Kherson,” says 33-year-old Alla Malchenko, who stayed behind during the nine-month Russian occupation of the city because her husband works as a medic. Before the war she sold women’s fashion online.

While Kherson had a pre-war population of about 280,000 people, only a fraction of that remains today.

Malchenko says the liberation of the city by Ukrainian troops was triumphant, but with the onset of cold weather, life has become a struggle.

“It’s so cold in the houses and buildings. People are getting sick en masse,” she told CBC News in an interview via Zoom.

Malachenko said she shares a small generator with her parents, and their daily routine involves waiting in line to get fuel to run it.

“Tomorrow morning, she [my parents] come to us and we’ll give them our generator so they can heat their apartment and freeze their fridge.”

In the evening she said she will get the generator back so she and her husband can charge their phones and keep their fridge running.

Neither she nor her parents have running water in their apartments, so they also have to wait in line to fill water bottles to do laundry and flush toilets.

Like others dealing with blackouts, Malachanko said she is not home during the day because of the cold. Instead, she seeks common places.

“Psychologically it’s hard,” she told CBC News. And although she would prefer Kiev, where life is easier, she intends to stay with her husband.

Ukrainian officials say retreating Russian troops appear to have damaged or destroyed much of Kherson’s water and power infrastructure when they left, making recovery more difficult than in other parts of the country.

Complicating the city’s reconnection to the power grid is that the entire region is also heavily covered in explosives.

Emergency services work with sappers who must first clear unexploded ordinances and declare an area safe before repair work on the power grid can begin.

“Sometimes it takes more than an hour to clear a square meter of territory,” said Oleksandr Khorunzhyi, press officer of the Ukrainian emergency service, highlighting the enormity of the work ahead.

So far, he said more than 5,000 explosive devices left behind by Russian troops have been dealt with.

However, in at least two buildings in Kherson, including a police headquarters, the mines and booby traps were so abundant that the buildings had to be demolished, Khorunzhyi said, because it was impossible to clear them of all explosives.

The hard truth on the ground is that the amount of work required to make Kherson a functioning city again may not happen soon enough as winter approaches.

In Lviv and Kiev, people can still buy warm clothes and have access to supplies such as flashlights and candles, but that is not the case everywhere.

Simon Johnsen, a Norwegian aid worker with Frontline Medics, said the people he sees in Kherson have no power and are already dangerously cold.

And shops in places like Krematorsk and Mykolaiv are closed, meaning the people living there depend on humanitarian aid, he said.

“I think people are afraid of what’s to come,” said Johnsen, who is part of a medical evacuation team working in Ukraine’s war-ravaged eastern regions. “In the worst case, people will die and freeze to death.”