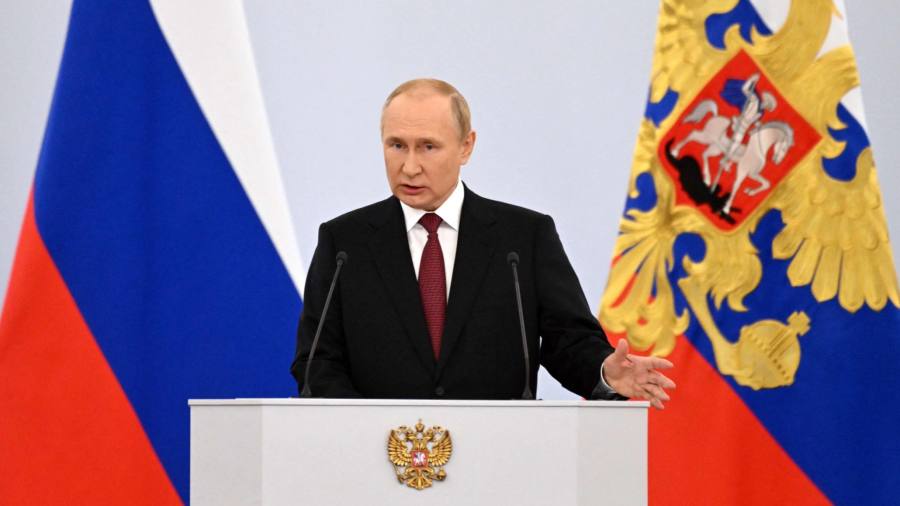 Vladimir Putin has annexed four regions of southeastern Ukraine and pledged to use “all means” available to Russia to defend the territory in a speech that marked a further escalation in his war against Kiev and his resentment towards its Western allies.

In a ceremony marking the move on Friday, the Russian president called on Ukraine to negotiate an end to the war, but expressed his deepest anger at the “true masters” of Kiev in the west, whom he accused Russia of to destroy’.

The annexations are a dramatic attempt to increase stakes in the conflict by bringing them under Russia’s nuclear umbrella.

Ukrainian President Volodymyr Zelenskyy on Friday announced in response to Putin that his country has formally requested accelerated accession to NATO’s military alliance.

“Today, here in Kiev, in the heart of our country, we are taking a decisive step for the security of the entire community of free peoples,” Zelenskyy said in a video address outside his office. “We are taking our decisive step by signing Ukraine’s application for accelerated accession to NATO”.

In the 37-minute speech in the ornate St. George Hall of the Kremlin, Putin said that an attack on the four regions, which he now considered part of his country’s territory, would be treated as an attack on Russia and with full support. force would be answered. .

“We will defend our country with all the means at our disposal and do everything we can to protect our people. This is our great liberating mission,” he said.

Putin said Russia was willing to hold peace talks with Ukraine but declared the four regions – Donetsk, Luhansk, Kherson and Zaporizhzhya – off limits in future negotiations after hastily organized “referendums”.

“People made their choice, an unequivocal choice,” said Putin, describing the voices, which were condemned internationally, as “the will of millions of people.”

“The people who live in Luhansk and Donetsk, Kherson and Zaporizhia are becoming our citizens. Forever,” Putin said. “The current Kiev government should treat the free expression of the will of these people with respect and nothing else. Only in this way can there be a path to peace.”

As he spoke, Ukrainian troops pushed further east into northeastern Donetsk and came close to the town of Lyman, an important staging area for Russian troops.

Russia does not fully control any of the four annexed regions and has vowed to “liberate” at least two of them from Ukraine’s grip as Kiev continues its counter-offensive.

Kremlin officials have said Russia could view further Ukrainian attempts to retake the regions as an attack on its sovereignty and respond by using tactical nuclear weapons.

While Putin made no reference whatsoever to Russia’s own nuclear arsenal, which he had threatened to use when he announced the annexations last week, he accused the US of setting a “precedent” by setting up Hiroshima and the United States at the end of World War II. to bomb Nagasaki. .

But most of the president’s speech was spent on rage against the West. It covered topics as diverse as Western sanctions, European imperial history, jokes about gender reassignment operations and allegations that ‘Anglo-Saxons’ attacked two gas pipelines in the Baltic Sea this week.

Citing Russia’s imperial and Soviet pasts as a justification for taking Ukrainian territories, Putin proclaimed a grim rallying cry to end US hegemony through an “anti-colonial movement” led by Moscow.

“They shamelessly divide the world into their vassals and everyone else,” said Putin, who accused the Western elite of being “colonial” and “racist”.

“The West is looking for new ways to attack our country, to weaken and destroy Russia,” he added. “They just can’t bear to have such a big country with its territory, rich natural resources, and people who don’t want to follow anyone else’s rules.” 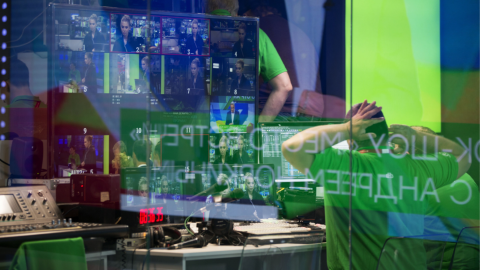 Putin claimed that Russia had defeated a “sanction blitzkrieg” and warned other countries could face similar restrictions.

“They thought they could rebuild the whole world. But as it turns out, not everyone is so excited about this bright future. Just total masochists and fans of other non-traditional forms of international relations,” Putin said with a homophobic joke.

“We have heard about the containment of Russia, China and Iran. We think Latin American and Middle Eastern countries will be on this list soon,” he added. “Everyone is within their reach – including our neighbors” in the former USSR, some of whom moved away from Moscow during the Moscow War. distanced.

Putin offered hope that the EU would drop its aid to Ukraine as it prepares for a difficult winter without Russian energy supplies.

“Politicians in Europe will have to convince their citizens to wash less and heat their homes themselves. And when asked why they point their finger at Russia,” he said.

“You can’t feed people with paper dollars and euros,” Putin said. “You can’t warm people up with inflated valuations — you need energy resources.”