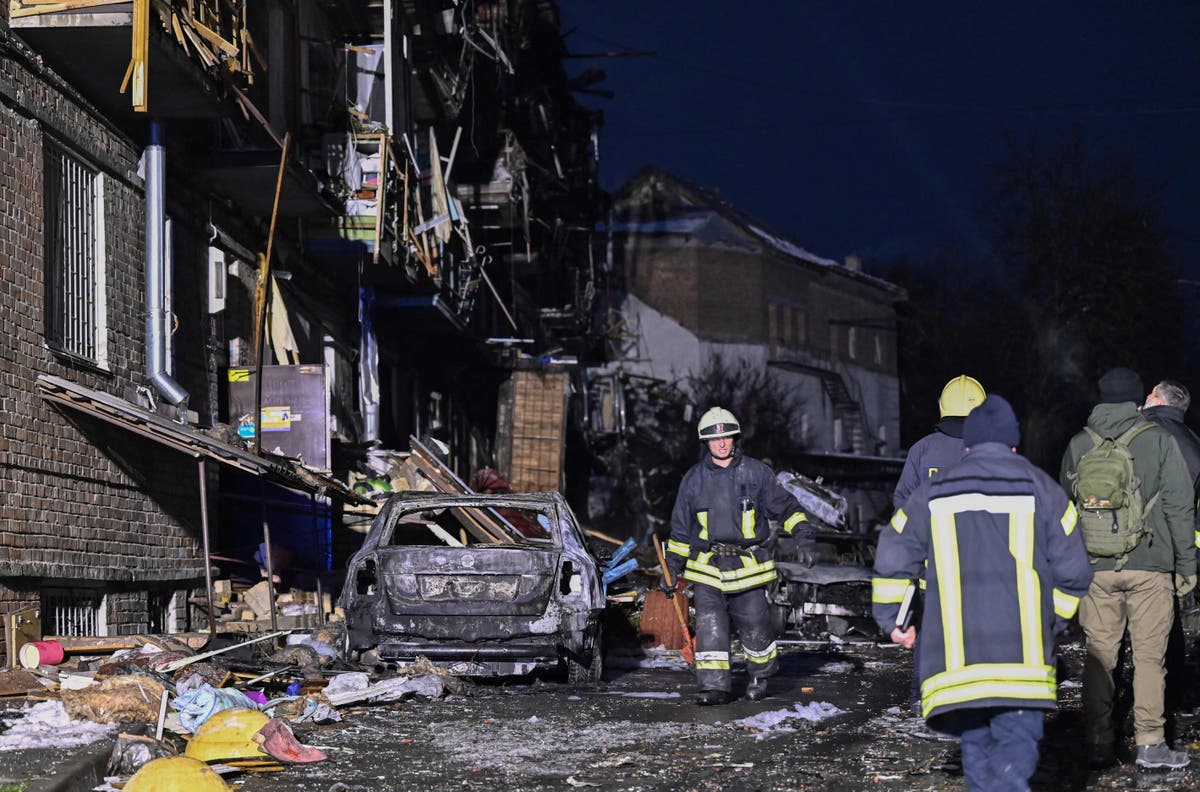 A barrage of Russian missiles hit Ukraine on Wednesday, killing at least six civilians and forcing nuclear plants to shut down as power went out in Kiev and several other regions.

Ukrainian President Volodymyr Zelensky called for a meeting of the United Nations Security Council to discuss the damage to critical infrastructure from the Russian strikes – the latest in a brutal campaign that threatens to leave millions ahead of a frigid winter with severely limited access to heating and light.

“The murder of civilians and the destruction of civilian infrastructure are acts of terrorism,” Zelensky said. “Ukraine will continue to demand a decisive response from the world to these crimes.”

Three nuclear plants were forced to shut down their reactors, Ukraine’s national energy company Energoatom said, while officials reported power outages in Kiev and regions across the country, including Kharkiv, where the mayor of Ukraine’s second-largest city said it was public transport had stopped.

Meanwhile, electricity went out for half of Moldova, a neighboring country whose power grid remains connected to Ukraine’s, and suffered a similar outage last Tuesday.

Strikes in Kiev killed four people and injured 34, including five children, regional governor Oleksy Kuleba said, while mayor Vitali Klitschko said a 17-year-old girl was among those killed when a rocket hit a residential block.

“I was sitting in my flat and heard an explosion. My windows in my hall, kitchen and bedroom were thrown open by the blast wave,” said 55-year-old Yuriy Akhymenko, who lives in an apartment building across the street from the building that was hit, according to Reuters.

Kyrylo Tymoshenko, deputy head of the Ukrainian president’s office, reported that a 73-year-old man was killed in shelling in the city of Kherson just over a week after Moscow commanders withdrew troops from the southern regional capital and across the country. retreated up the Dnipro River.

Nuclear reactors were shut down at Pivdennoukrainsk in the south and the Rivne and Khmelnytskyi plants in the west, Energoatom said, while Europe’s largest nuclear complex at Zaporizhzhia remained shut down due to nearby shelling that both sides blamed each other on.

Most thermal and hydroelectric plants were also forced to close, Ukraine’s energy ministry said. As a result, it said, the vast majority of electricity consumers in parts of the country under Ukrainian control were shut down.

By 6 p.m., electricity had been restored to half of the western city of Lviv after repairs, the mayor said.

Earlier, Russian missiles hit a maternity hospital in the Zaporizhia region overnight, killing a baby, the regional governor said in a Telegram statement.

Moscow has been openly targeting Ukraine’s energy infrastructure since October, following an attack on a key Russian bridge to Crimea that followed massive losses of captured territory in crushing defeats for the Kremlin.

Ukraine says the attacks amount to war crimes, deliberately designed to harm civilians and break the defending nation in what is sure to be a challenging winter.

Zelensky remained defiant, despite the government’s assessment that nearly half of Ukraine’s energy system is damaged. He said, “We will renew everything and endure all this, for we are an unbreakable people.”

On Tuesday, he announced that special “invincibility centers” would be set up across the country to provide free electricity, heat, water, internet, cell phone connections and a pharmacy.

Fighting continued on the ground in the east, where Russia is pushing for territory its proxy forces have claimed since 2014, with Ukraine reporting heavy attacks and continued shelling in the Donetsk region over the past 24 hours.