A gunman opened fire in a busy shopping center in the… Danish capital, killing three people and seriously injuring three others, police said.

A 22-year-old Danish man was arrested after the shooting on Sunday (Monday AEST), Copenhagen Police Inspector Soren Thomassen told reporters, adding that there was no indication that anyone else was involved in the attack, although police are still was doing research.

Thomassen said it was too early to speculate about the motive for the shooting, which took place in the late afternoon at Field’s, one of the largest shopping centers in Scandinavia and located on the outskirts of the Danish capital.

When the shots rang out, some people hid in shops, while others fled in panic, according to witnesses.

“It’s pure terror. This is terrible,” said Hans Christian Stoltz, a 53-year-old IT consultant, who brought his daughters to watch Harry Styles perform at a concert scheduled for Sunday evening near the mall.

“You may wonder how anyone could do this to another human being, but it goes beyond… anything possible.”

Thomassen said the victims included a man in his 40s and two “youngsters”, without giving details. Several others were injured, three of them in critical condition, he said.

He said police received the first reports of a shooting at 5:37 p.m. local time and arrested the suspect 11 minutes later.

Thomassen described the suspect as an “ethnic Dane,” a phrase commonly used to indicate that someone is white.

Danish broadcaster TV2 published a grainy photo of the alleged gunman, a man wearing knee-length shorts, a vest or sleeveless shirt, and holding what appeared to be a rifle in his right hand.

“He spoke to me and said it (the gun) isn’t real while I was filming it. He seemed very proud of what he was doing.”

Danish Prime Minister Mette Frederiksen said the Scandinavian country has been hit by a “cruel attack”.

“Our beautiful and usually so safe capital had changed in a split second.”

Footage from the scene showed people running out of the mall and TV2 posted a photo of a man being placed on a stretcher.

After the shooting, a huge contingent of heavily armed police officers patrolled the area, while several fire engines were also parked outside the mall.

Organizers have canceled Harry Styles’ concert, which was scheduled to take place at the nearby Royal Arena, on police orders.

On Snapchat, Styles wrote: “My team and I are praying for everyone involved in the shooting at the Copenhagen shopping mall. I am shocked. Love H.”

The royal palace said a reception with Crown Prince Frederik linked to the Tour de France cycling race had been cancelled.

The first three stages of the race were held in Denmark this year.

It was the worst weapons attack in Denmark since February 2015, when a 22-year-old man was killed in a shootout with police after a shooting in the capital that left two people dead and five police officers injured. 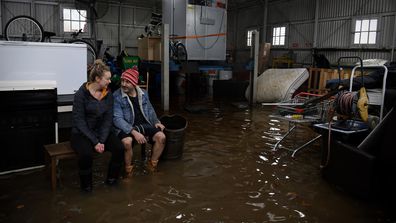