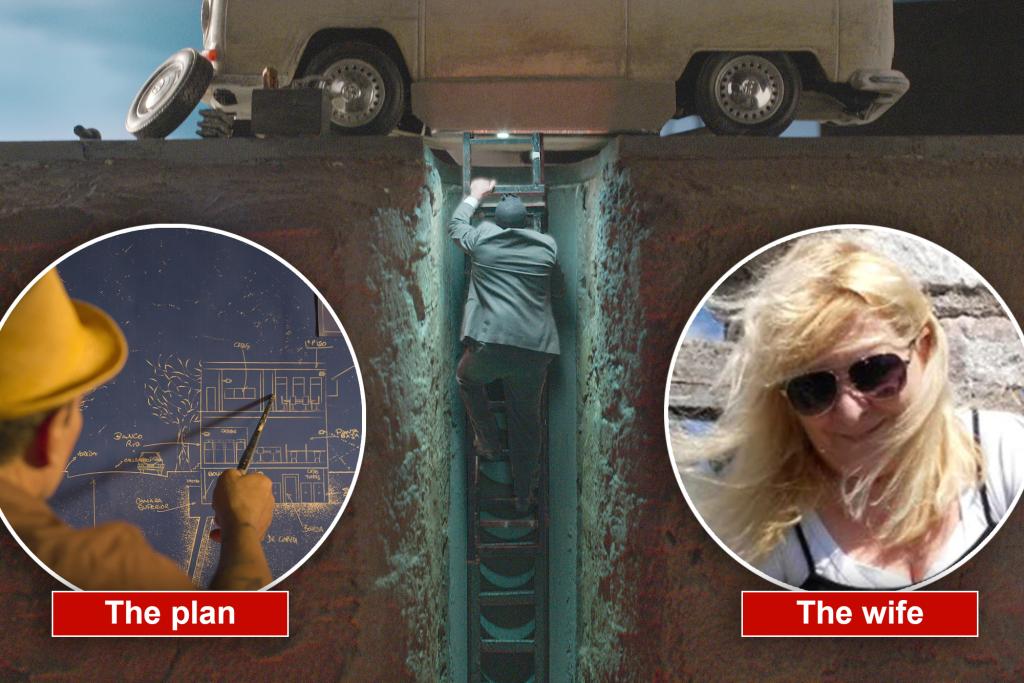 In 2006, an army of police officers surrounded the Banco Rio in Acassuso, Argentina, and negotiated for hours with a daring group of robbers inside.

The criminals took hostages and demanded that the police bring them pizza, as the nation saw on live TV. Snipers sit in trees, ready to shoot if needed.

Finally, a robber told police they were ready to surrender. But when the police entered the bank, there was no culprit to be found. They had disappeared without a trace, allegedly taking $20 million in cash and valuables from lockers.

“We use[d] [a] tunnel, not to break in, but to break out,” said the mastermind of the heist, Fernando Araujo, in the new Netflix documentary “Bank Robbers: the Last Great Heist,” which debuts Wednesday.

“No one [had] ever intended to do a robbery like this.”

An artist and small pot grower, Araujo began concocting the plan in 2003, when he rented a house near the bank and began exploring the sewer tunnels beneath. Partly inspired by the ‘Teenage Mutant Ninja Turtles’, he called his plan the ‘Donatello Project’.

Posing as an architecture student, he called the public works agency in Acassuso to get information about how the ground might treat tunnels. He then convinced Sebastián García Bolster, a local motorcycle mechanic, to join his team as a civil engineer.

They calculated how to drill 15 meters diagonally into the bank, making their tunnel essentially a triangular hypotenuse between the building’s basement and the sewer. This requires heavy machinery.

“To make a hole the size of a soda bottle” [with pickaxes] took an hour. It was impossible. So we had to put in a 220-watt generator so we could use an electro-pneumatic drill,” says Araujo.

When their plans came together, they found more men to be part of the heist. Career crook Rubén “Beto” de la Torre was recruited like muscles and Luis Mario Vitette Sellanes showed up too – he was to be designated police negotiator. They recruited another man referred to only as “the Doc” in the film, who was reportedly both a lawyer and a sophisticated thief.

After years of tinkering, the plan came into play. Instead of going through the sewers to get to the local waters, as law enforcement officers would likely predict, Araujo’s team would delve deeper into the bowels of the city.

The crew bought an old van and modified it with a floor hatch so they could park it over a manhole and climb right into the vehicle without ever going out onto the street. They recruited a man named Julián Zalloecheverría to be their driver and someone called “the boy” to serve as an extra muscle.

On Friday, January 13, 2006, around 12:38 p.m., the team of robbers burst through the front door of the bank, guns in hand and ready to take hostages. Sellanes went to the top floor to get the bank manager, then took the man to the basement where the safe and safe were. There he forced a guard to hand over his weapon and then leave the building.

The police quickly went to the bank and Sellanes started fake negotiations with the police to get more time for his accomplices to collect the loot. He donned a fake mustache, yarmulke and goggles to throw off police and snipers peering through the windows of the bank. At 2:30 p.m., he made it a point to release two hostages.

Meanwhile, Bolster was in the basement, using a special cannon to break open the safe as quickly as possible.

“I didn’t stop to see what was inside or if it actually opened up or anything,” Bolster says. “Just break, break, break all the locks.”

After two hours, they had broken open 143 boxes and it was time to escape. Sellanes told authorities they were ready to give up.

“Bring us some pizza, bring us some soda, we’ll eat some and surrender,” Sellanes told the negotiators. He knew they would be out of the building by the time the troops entered.

The robbers splashed chlorine through the bank to cover their DNA and threw random locks around to scare the investigators from the crime scene. Then they escaped into their tunnels and into the sewers without a trace.

There awaited them two small boats, one with a motor. But the engine wouldn’t start, so the men had to paddle through the sewers to reach their van 14 blocks away. Araujo stretched out on the loot in one of the boats to secure it.

They successfully reached the van and drove to their safe house. The officers were none the wiser.

“I immediately wanted to turn on the TV and make sure they weren’t after me,” Araujo says in the film. “Here we were with the money so far away.”

The men then divided the money evenly among themselves and separated.

Sellanes says he drove off with “four garbage bags full of money.”

Authorities were initially stunned by the escape. They didn’t even realize the gang had dug a tunnel until a bank employee spotted a piece of furniture covering the hole.

In it, they found booby traps and a note from Araujo that read, in Spanish, “In a wealthy neighborhood, with no guns or grudges, it’s just money and not love.”

It was a perfect job, the proceeds were huge, the police had no leads and no one was injured. Araujo and Co. seemed to have gotten away with the heist of the century and could enjoy their riches in peace.

Then, weeks after the robbery, Beto noticed something wasn’t right.

“I will return [home] one day and find my [stash] bag is out of place,” he says in the film. “I saw that the pile of money had fallen quite a bit.”

His wife, Alicia di Tullio, admitted to him that she stole about $300,000 and some loot from a safe deposit box from Beto without asking permission.

The two, who had been together for 18 years, got into an argument. Beto demanded that she immediately return what she had brought and left the house with his leftover loot on a whim. Furious, Di Tullo called the police and turned her husband in.

The men realized their perfect plan had been thwarted. Sellanes recalls the doctor frantically calling him and saying, “De la Torre’s wife is going to turn us all in soon. She’s asking us all to pay her $300,000. If we don’t, she’ll give us up.”

Sellanes replied, “Doc, she can fuck herself. I don’t give her anything, let Beto solve all this with her and leave me out of it.”

But Beto couldn’t fix what his wife had done.

Beto, Bolster, Sellanes, Araujo and Zalloecheverría were all arrested and charged, with Di Tullio serving as a confidential witness.

“She told us she had knowledge of the situation… for the purposes of this case, there is no evidence to allow us to say what happened between [Beto and Di Tullio]’ said prosecutor Gastón Garbus in the film. “I feel like it’s related to the money and not caused by resentment about the presence of another lady.”

Beto confirmed that her motive was money. “She Appreciated” [it] more than family and that was it, the tragic end of my story, I think of everyone’s too,” he said.

In 2010, Beto was sentenced to 15 years, Araujo 14, Zalloecheverría 10 and Bolster nine. Sellanes agreed to a separate, expedited trial where he received 14 years for not only the robbery, but other miscellaneous crimes he was also associated with around that time. The Doc and the boy were never caught.

A happy ending for everyone?

None of the men eventually served their sentences in full, and they are all now free and celebrated for their infamous robbery.

“There were people who suddenly idolized this and saw it as, I don’t know, something extraordinary,” Araujo says.

Sellanes has more than 30,000 Twitter followers collectedand the gang’s story was immortalized in a 2020 thriller comedy “The Heist of the Century.”

Araujo says their story has a happy ending.

“Everyone who played a part in this story won. Prosecutors made a career, police officers then became detectives and the judges were recognized. The victims’ insurance has brought them more than they had,” he says.

In the documentary, several men hint that much of the money and valuables they stole were never recovered.

“Everyone is curious, it’s great … where is it? [the rest of the loot]? It’s in the Cayman Islands in the, you better write this down, CBU [account] number 24!” says Araujo sarcastically.