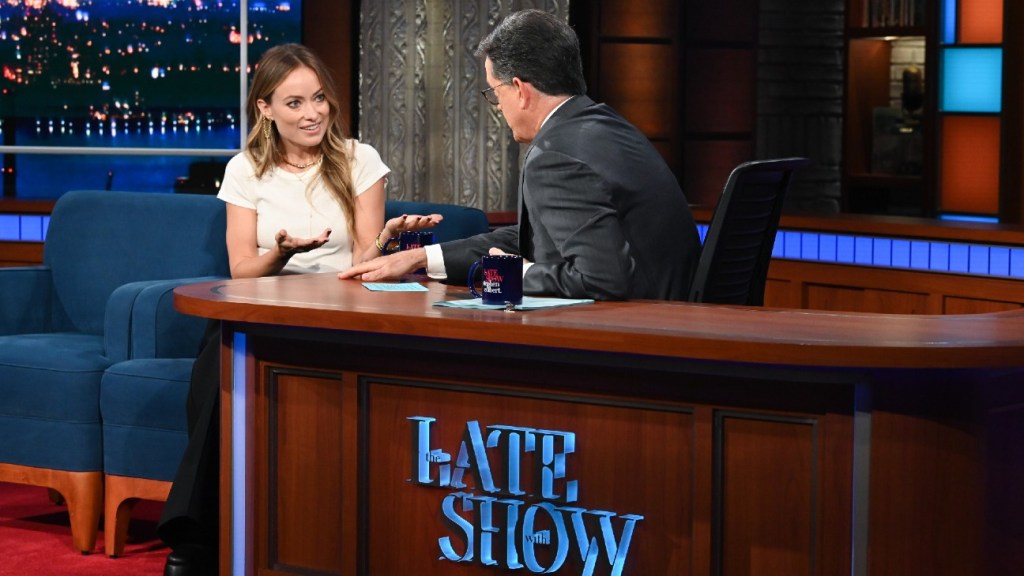 The don’t worry baby director and actress is a guest on CBS’ The late show on Wednesday prior to the release of the Warner Bros. movie this Friday, where she raised several rumors surrounding the project, starting with Shia LaBeouf.

In early September, LaBeouf came forward and refuted Wilde’s claims that he had been fired don’t worry darling, said he instead dropped out of the film and provided lyrics and videos showing her asking him to stay in the cast.

When asked by Colbert to clarify whether LaBeouf has quit or been fired from the film, Wilde said she was trying to mediate between the actor and her lead actress Florence Pugh.

“When it became clear that it was not a sustainable working relationship, I was given an ultimatum,” she told the late night host. “I chose my actress, which I’m very happy with. Was I sorry at the time that we couldn’t make it work? Sure. Information about him later came to light that made sure I had made the right decision ? Absolute.”

Colbert then pushed her to clarify why LaBeouf thinks he quit while she thinks he was fired, to which she replied that, as it happened, they both felt like they were moving on without each other.

Then the director discussed the so-called “Spit-Gate” speculation that had surrounded a viral video and led social media users to wonder if Harry Styles spat on co-star Chris Pine during the film’s premiere earlier this month in the Venice Film Festival.

“Another one of our weird rumours, Spit-Gate, which you may have heard of, I guess…” said Wilde before Colbert interrupted her.

The host made it clear that he had wanted to ask Wilde about the furore and appeared to read from his card: ‘Did Harry Styles spit on Chris Pine? Why or why not? Support your answer.”

Wilde laughed and replied, “No, he didn’t. But I think it’s a perfect example of people looking for drama everywhere. Harry didn’t spit on Chris, in fact…”

Colbert interrupted her again to joke, “Time will tell.”

Pine’s team previously released a statement emphatically denying Styles spit on him. In addition, Styles poked fun at the debate at a recent appearance at Madison Square Garden.

Finally, Wilde addressed the rumors that she and Pugh are “arguing.”

“I have nothing but respect for Florence’s talent,” she told Colbert. ‘She’s fantastic. She’s on the set of her movie Dune right now, and there’s nothing cooler than a busy actress. I have nothing against her for whatever reason.”

She went on to explain that she finds it interesting that none of her male fellow directors get questions about their cast, and the host agreed.

“People would actually be talking about the movie itself,” Wilde said. “They are praised for being tyrannical. They can be examined over and over again, it still doesn’t overtake conversations about their actual talent or about the film itself. This is something we are used to. They’re just very different standards being created for women and men in the world as a whole.”