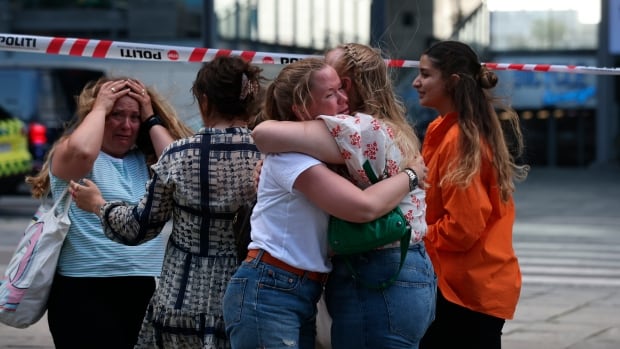 “We know there are several deaths” and “several injuries,” Thomassen told a news conference.

He said there was nothing to indicate that other suspects were involved, adding that terrorism cannot be ruled out at this stage.

Thomassen gave no further details about the victims or suspects, or how many people were killed or injured.

The capital’s main hospital, Rigshospitalet, had received a “small group of patients” for treatment of the incident, possibly more than three, a spokesman told Reuters. It had engaged additional staff, including surgeons and nurses, the spokesman added.

Police said they were first alerted to the shooting at 5:36 p.m. local time (11:36 a.m. EDT). They advised people in the mall to stay put and wait for police help, and asked other people to stay away.

“We are not yet sure how many people have been injured or killed, but it is very serious,” Copenhagen mayor Sophie Hæstorp Andersen said in a Facebook post.

Police said on Twitter that they had a “massive” presence at the mall and called on the public to submit images and other information from the scene.

Several fire trucks were also parked outside the shopping center.

Footage from the scene showed people running out of the mall, and Danish broadcaster TV2 shared a photo of a man being placed on a stretcher.

Witnesses said people were crying and hiding in shops. Laurits Hermansen told Danish broadcaster DR that he was in a shopping center clothing store with his family when he heard “three-four bangs”. Really loud bangs. It sounded like the shots were fired right next to the store.”

An event in southern Denmark to commemorate the end of the first three stages of the Tour de France cycling race, organized by the Danish Crown Prince and in the presence of Prime Minister Mette Frederiksen, was canceled late Sunday, the Royal House said on its website. .

The shopping center is located on the outskirts of Copenhagen, opposite a metro line connecting the city center with the international airport. A major highway also runs adjacent to Fields.

British singer Harry Styles was set to perform later in the evening at a concert venue less than a mile from the mall.

The concert will go ahead as planned after close consultation with police, and half of the audience has already entered the venue, concert promoter Live Nation said in an emailed response to Reuters.