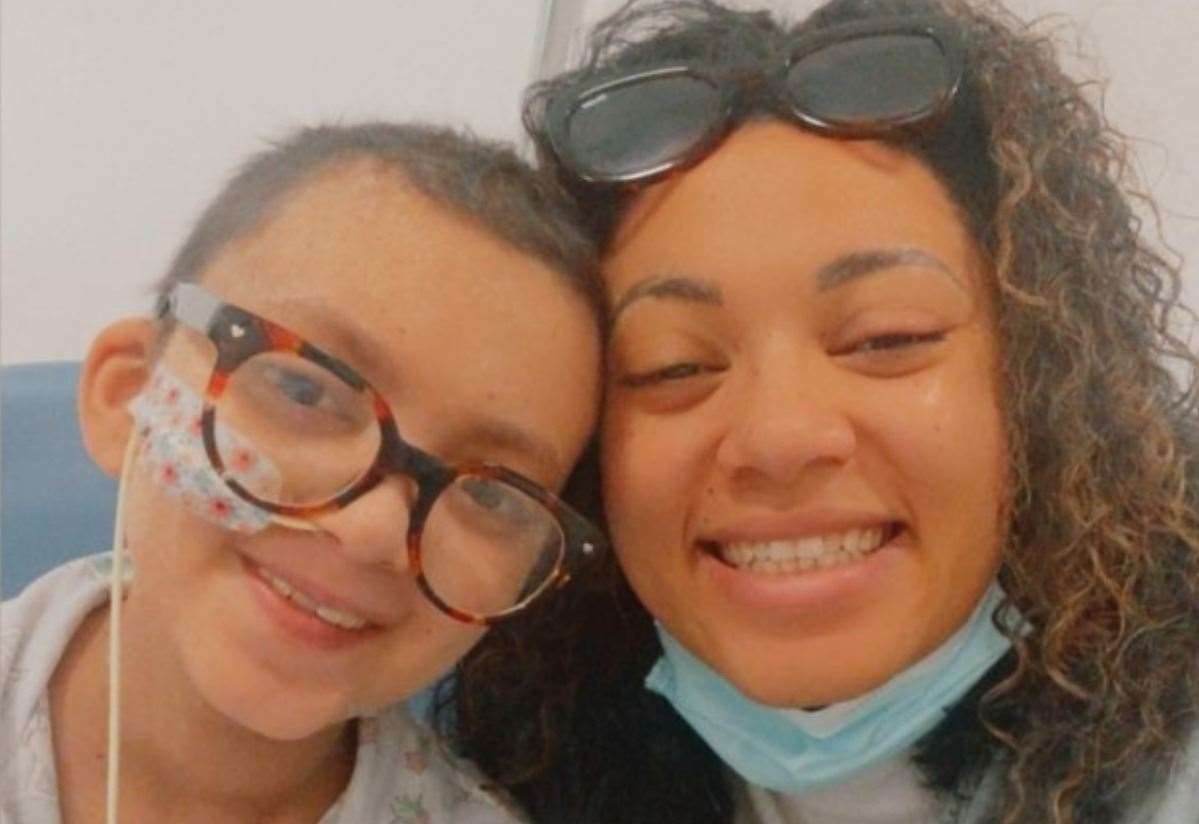 One grieving mother described the heartbreaking moment when her terminally ill daughter asked her, “Am I going to die?”

Keisha Pile-Gray, of Westgate-on-Sea, lost nine-year-old Aurora in June 2021 after a 13-month battle with Burkitt’s lymphoma, a rare blood cancer.

Now the mother of three remembers the devastating moment she had to tell her daughter she had the disease.

“We never said she had cancer to begin with,” Keisha explained.

“We said she had really bad blood and she needed medication to get better.

“She said ‘shall I call the phone’ [end of treatment] clock?’ and I said ‘yes, if you’re all better, you can ring the bell’.

“My doctor had called me, about something completely unrelated, and I said ‘Look at the moment I don’t really care, my daughter has been diagnosed with cancer’ and Aurora heard it.

“I assumed she had made the connection when she said she rang the bell. She started crying and asked if she was going to die.”

Aurora was diagnosed after multiple visits to doctors and emergency room over the span of a few weeks.

It started as a pain in her chin, but when a lump appeared in her neck a few days later, she was given antibiotics.

When the lump got bigger and another appeared, Aurora was taken back to the ER and prescribed a new course of antibiotics.

But after no improvement, she returned to the hospital – only to be told it was an infection and sent home.

Keisha said: “We argued for her to stay, although the doctor wasn’t too happy. He asked ‘what do you propose?’ and I said, ‘I’m not a doctor, but she’s on antibiotics for ten days now and she should be getting better, but she’s getting worse.’

After tests, the doctors referred Aurora to London to be seen by a range of specialists.

Keisha continued: “I went home to pack my bags and say goodbye to the children – when my son was five months old and my little girl had just turned two.

“I went back to the hospital and four hours later they pulled me into a room and said she had lymphoma or leukemia.”

It was later confirmed that Aurora had Burkitt’s lymphoma.

“I thought she was going to die,” Keisha recalls.

“Because she was so bad and because we had waited so long and it was building and building.

“When the lump first came up, we took her to the doctors and then we went for a walk in the park. She walked around the park, smiling and skipping. On day 10 she was taking 3 liters of fluid a day because her kidneys were closing it. It happened so fast. I said ‘does this mean she’s going to die?'”

She then received four cycles of chemotherapy at Royal Marsden Hospital. Aurora was declared in remission, but unfortunately, just two weeks later, the family received a call to say she was having a relapse.

Aurora was then given another form of treatment called RICE chemotherapy.

“It looked like it worked at first, but just before Christmas, she started swelling.”

A New Year’s Eve scan revealed she had cancer “all over her pelvis”.

By April, she was back in remission and on May 13, she underwent a stem cell transplant.

But five weeks later, Aurora relapsed again. On June 15, doctors confirmed there was nothing more they could do.

Aurora returned home on June 21 and died just a week later, on June 29.

Keisha said at the time, “I could write a million words about how I feel, but none of them would do it justice.

“The grief is utterly overwhelming and we are grateful that all our family and friends have showered us with support.

The family has been supported during Aurora’s cancer treatment and since her death through Young Lives vs Cancer.

The charity provided a social worker to help them cope with the emotional, practical, and financial consequences of a childhood cancer diagnosis.

She always came to visit Aurora and told her jokes. It’s just nice to have someone let me vent, sometimes that’s all you need.

“They go through everything you need to know, not so much about the medical side, but life out there and the help they can provide.”

Keisha’s family is one of many who share their toughest conversations during treatment and afterward as part of Childhood Cancer Awareness Month.

Rachel Kirby-Rider, Young Lives vs Cancer’s chief executive, said: “It’s hard to imagine the conversations that children with cancer and their families like Aurora’s have day in and day out.

“Our social workers help them cope with those conversations. They tailor their support to each family, they can provide a safe space when a parent needs to talk about their worst fears, give a parent a children’s storybook to give treatment to a young child explaining to their sibling, or having a difficult conversation on behalf of a family.

“Childhood Cancer Awareness Month is an opportunity for all of us to listen to the experiences of children with cancer and their families, and show our support.”

For more information or to donate, visit www.younglivesvscancer.org.uk.