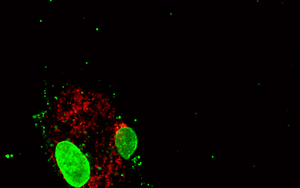 Mitochondria are organelles found in most cells that are best known for generating the chemical energy needed to power cellular functions. However, researchers are increasingly discovering how mitochondrial function — and dysfunction — play a critical role in numerous diseases and even aging.

In a new study published in the Aug. 4, 2022, online issue of ImmunityScientists from the University of California San Diego School of Medicine and Salk Institute for Biological Studies report a surprising link between mitochondria, inflammation, and DNMT3A and TET2, a pair of genes that normally help regulate blood cell growth, but when they’re mutated are associated with an increased risk of atherosclerosis.

While studying the role of DNMT3A and TET2 mutations in clonal hematopoiesis, which happens when stem cells start making new blood cells with the same genetic mutation, co-senior study author Christopher Glass, MD, PhD, professor in the Departments of Medicine and Cellularity and Molecular Medicine at the UC San Diego School of Medicine, and colleagues noted that abnormal inflammatory signaling related to DNMT3A and TET2 deficiency in blood cells played an important role in the inflammatory response that promotes the development of atherosclerosis.

But the question remained how DNMT3A and TET2 genes were involved in inflammation and atherosclerosis – the buildup of fatty plaques in arteries and the primary underlying cause of cardiovascular disease. It is estimated that about half of Americans between the ages of 45 and 84 have atherosclerosis, the leading cause of death in the United States and westernized countries.

“The problem was that we couldn’t figure out how DNMT3A and TET2 were involved, because the proteins they encode do seemingly opposite things with regard to DNA regulation,” Glass said. Their antagonistic activity led us to believe that other mechanisms may be at play, prompting us to take a different approach and contact Shadel, who had discovered the same pathway of inflammation years earlier while investigating responses to mitochondrial DNA. stress.”

What did they find?

Inside mitochondria is a unique subset of the cell’s DNA that must be properly organized and condensed to maintain normal function. Shadel’s team had previously investigated the effects of mitochondrial DNA stress by removing TFAM, a gene that ensures that mitochondrial DNA is packaged correctly.

Shadel and colleagues found that when TFAM levels are lowered, mitochondrial DNA is expelled from the mitochondria into the interior of the cell, triggering the same molecular alarms that alert cells to a bacterial or viral invader and activate a defensive molecular pathway that causes an inflammatory response.

Glass and Shadel’s labs collaborated to better understand why DNMT3A and TET2 mutations led to inflammatory responses similar to those observed during mitochondrial DNA stress. The teams applied genetic engineering tools and cell imaging to examine cells from people with normal cells, those with loss-of-function mutations in DNMT3A or TET2 expression, and those with atherosclerosis.

They found that experimentally reducing the expression of DNMT3A or TET2 in normal blood cells produced similar results to blood cells with loss of function mutations and blood cells from atherosclerosis patients. In all three cases there was an increased inflammatory response.

They also noted that low levels of DNMT3A and TET2 expression in blood cells led to decreased TFAM expression, which in turn led to abnormal mitochondria DNA packaging, leading to inflammation due to released mitochondrial DNA.

“We found that DNMT3A and TET2 mutations prevent their ability to bind and activate the TFAM gene,” said first author Isidoro Cobo, PhD, a postdoctoral scientist in Glass’s lab. “Missing or decreasing this binding activity leads to mitochondrial DNA release and an overactive mitochondrial inflammatory response. We believe this may exacerbate plaque buildup in atherosclerosis.”

Shadel said the findings broaden and deepen the understanding of mitochondrial function and their role in disease.

“It’s very exciting to see that our discovery about TFAM depletion that causes mitochondrial DNA stress and inflammation is now directly relevant to a disease like atherosclerosis,” Shadel said. “Since we unveiled this pathway, there has been an explosion of interest in mitochondria involved in inflammation and many reports linking the release of mitochondrial DNA to other clinical contexts.”

Therapeutics that target inflammatory signaling pathways already exist for many other diseases. Glass and Shadel believe that blocking pathways that worsen atherosclerosis in patients with TET2A and DNMT3A mutations could provide the basis for new treatments.

Disclaimer: AAAS and EurekAlert! are not responsible for the accuracy of any press releases posted on EurekAlert! by sponsoring institutions or for the use of information through the EurekAlert system.