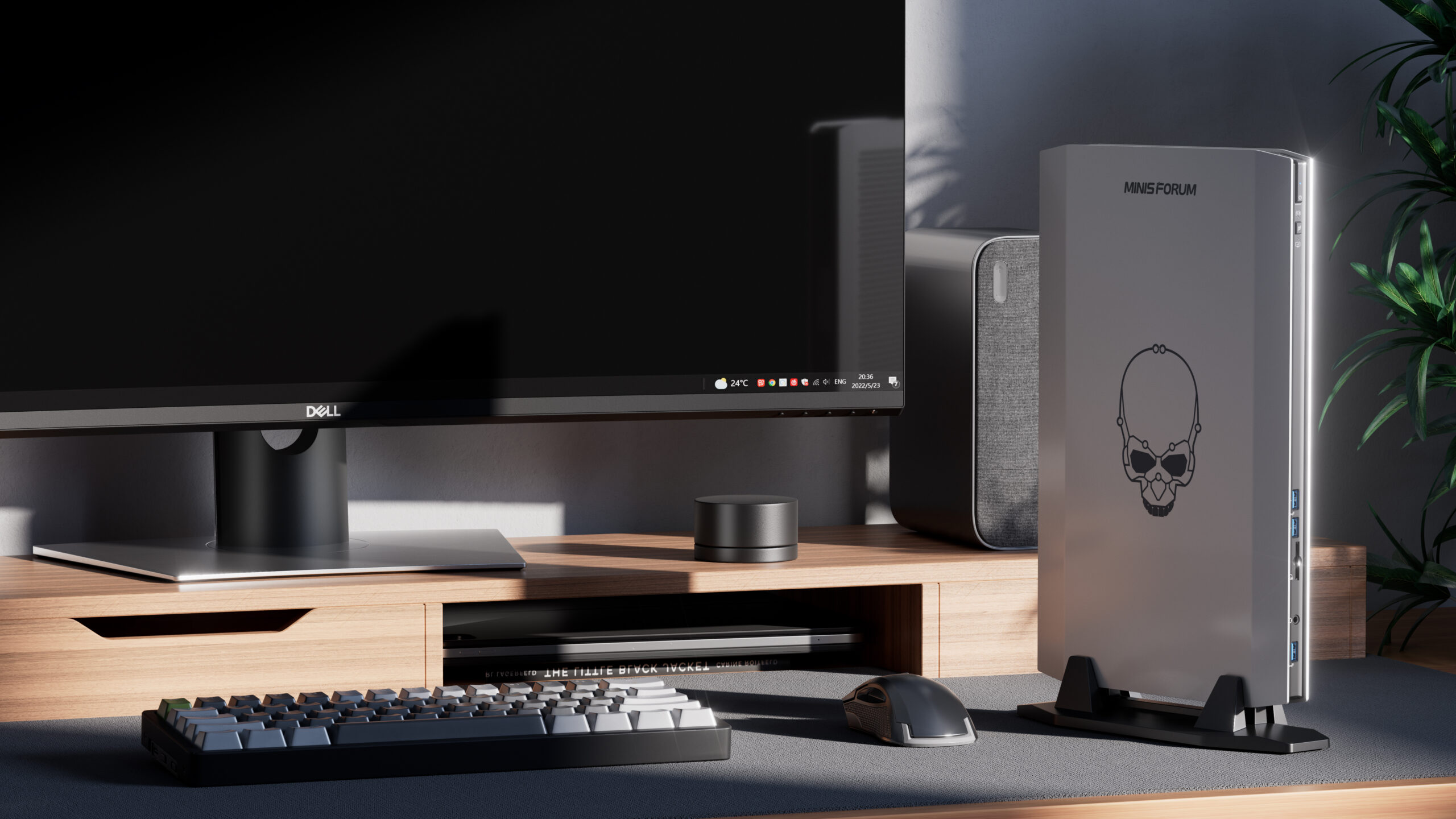 Minisforum’s NUCXi7 is aimed squarely at gamers who want a compact PC small enough to connect to their living room television and blend into their entertainment unit. The smaller and more energy-efficient shape also appeals to traditional PC users who want to save desk space and lower their electricity bills.

The NUCXi7 is about the size of a 15.6-inch gaming laptop without the screen, keyboard and battery. Powered by an 11th Gen Intel Core i7 processor and Nvidia RTX 3070 mobile GPU, the NUCXi7’s chassis resembles a sleek gaming console rather than a traditional desktop tower.

With a starting price of $1,029, the NUCXi7 is significantly less expensive than a comparable Intel NUC, while also boasting significantly better gaming performance.

Is the NUCXi7 the living room gaming PC to beat?

While considerably smaller and slimmer than a traditional small form factor (SFF) PC, the NUCXi7 is larger than your typical mini PC, such as the Beelink GTR5 I reviewed recently.

The NUCXi7 is designed to be mounted upright via the supplied sturdy metal stand. Due to the way the cooling is designed with the inlet on the bottom of the chassis, the unit cannot be laid on its side.

Overall, the NUCXi7 looks sleek and feels solid. It’s easy to access the inside by simply unscrewing three screws and sliding the bottom panel off. There are five thick copper heat pipes and two fans to keep the system cool and quiet.

When you look at the motherboard you can clearly see the roots of the NUCXi7 laptop with plugs and headers for connecting the keyboard, screen and battery still visible. At the top of the device, there’s a significant amount of empty space where the battery would normally sit. I would have preferred this space to be used for a 2.5-inch drive or removed entirely for more efficient use of space.

The NUCXi7 is a little light in the port department. It has an HDMI 2.1, Thunderbolt 4 and 2.5Gbit/s on the back and 3x USB 3.2 Type-A ports, a headphone jack and an SD card reader on the front. I would have liked more USB ports, as well as DisplayPort, and there seems to be enough space on the device to fit them.

That said, the inclusion of a Thunderbolt 4 is very useful. It effectively extends the life of the system as it offers the option to connect an external graphics card (eGPU) once the RTX 3070 starts to get a little long in the tooth.

Having an SD card reader is great, but it seems limited to USB 3 speeds, with my file transfer test coming in at 82MB/s with a V60 UHS-II SD card.

Next to the power switch is a boost button that boosts clock speeds and fan speeds, but the overall system still remains very quiet and certainly a lot quieter than a gaming laptop. In games, I found that the enhanced performance mode increased frame rates by 10% on average, so I recommend leaving it enabled.

The NUCXi7 uses a high-performance Intel Wi-Fi 6E-AX210 card, but I noticed that the range isn’t as great as some other laptops. Therefore, use the wired 2.5 Gbit/s port whenever possible for the best internet connection.

There is also the NUCXi5 model that comes with an Intel Core i5 CPU and RTX 3060 GPU for a starting price of US$859.

The included DRR4 RAM is from ADATA and is rated CL22, which is very slow in terms of latency. I felt the memory latency in daily use, with noticeable delays in opening new tabs in the Edge browser and playing 4K video. Swapping the RAM for some spare CL16 rated RAM I had on hand from another laptop completely fixed the lag issue.

Likewise, the included SSD is PCIe Gen3 and not PCIe Gen4, so read speeds topped out at 2300MB/s and write speeds at 1600MB/s in my CrystalDiskMark test. Note that for testing, I replaced the 512GB drive with a faster and larger 2TB PCIe 4.0 NVMEe SSD from Kingston (Model: NV2), which nearly doubled read and write speeds.

That’s why I recommend going for the barebones model and using the money saved for faster RAM and storage. You can find 16GB SODIMM low latency DDR4 RAM for as little as $70, while something like a Kingston NV2 1TB NVMe SSD goes for a street price of just $100. Going this route will not only save you some money, but you will also get much better performance from the NUCXi7.

After I disabled the RAM and storage, performance as a productivity and gaming machine was excellent.

Starting with synthetic benchmarks, the NUCXi7 achieved a single-core score of 1538 and a multi-core score of 9172. In 3DMark’s Time Spy benchmark, the RTX 3070 mobile GPU in the NUCXi7 achieved a graphics score of 9625. This is an excellent result and faster than gaming laptops I’ve tested with the same GPU. There’s also plenty of room to overclock if you want a little more performance.

On the gaming front, the NUCXi7 consistently delivered over 60fps as a baseline on ultra settings at 1440p resolution with every game I threw at it Check until God of war. The only two exceptions were Cyberpunk 2077 and Dying Light 2 which I had to reset to 1080p to get above 60fps. Slightly older titles such as Witcher 3 and Shadow of the Tomb Raider delivered an average of over 100 fps at 1440p on ultra graphics settings.

I was able to run a pretty surprising number of recent titles at native 4K at 60 fps, such as Forza Horizon 5 and Eternal fate.

My favorite way to play on the NUCXi7 is to run games at 1440p and use Nvidia’s DLSS to upscale to 4K, which looked fantastic on my 77-inch LG CX OLED. Using Nvidia’s AI-powered upscaling can sometimes look as good as native 4K and avoids performance hits normally associated with working at such high resolutions.

It’s worth noting that the NUCXi7 has a fully unlocked BIOS, which is rare on pre-built systems and increases overclocking potential.

The NUCXi7 offers great performance in an ultra-small and energy-efficient package. It’s a great choice for anyone looking for a desktop PC replacement without the complexity of building one. In terms of gaming performance, it outperforms every other Intel NUC on the market, as well as other gaming laptops equipped with the same RTX 3070 mobile GPU. Thanks to its premium cooling, it runs quieter and also offers generous headroom for overclocking.

With a starting price of $US1,029, the NUCXi7 is competitively priced and I recommend going the barebones route so you can outfit the system with faster RAM and storage. Of course, the NUCXi7 won’t convince traditional PC users who can build a more powerful and upgradable system for less, but then you don’t get something ultra-compact like this.

If you’re looking for an incredibly small and quiet gaming PC that’s both powerful and won’t break the bank, Minisforum’s NUCXi7 is hard to beat.

Excellent gaming performance for a system of its size

Room for overclocking and an unlocked BIOS

Could use more USB ports and a DisplayPort

The latency with the included RAM is too high

Cannot be laid on its side