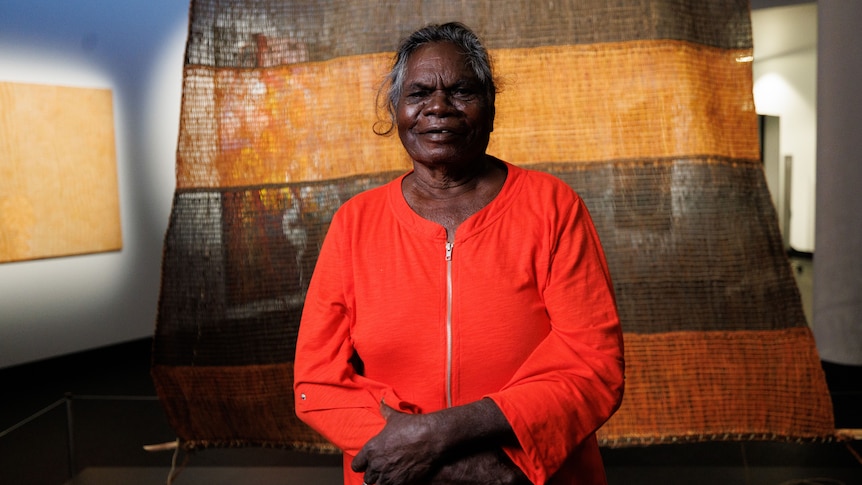 A sweeping, large-scale woven sail, once used on fishing boats between Arnhem Land and Indonesia prior to colonization, has won first prize at the prestigious National Aboriginal and Torres Strait Islander Art Awards.

Six other artists have won category awards, including bark paintings and multimedia works, chosen from 63 finalists from more than 200 entries.

These are the winners.

The weaving style used in the piece was taught to her by her father, who was taught by his father.

The work contains the rich black plant dye that Mrs. Garrawurra has become known for, which she collects and prepares herself.

Friend and sister Helen Ganalmirriwuy, who helped interpreters for Ms Garrawurra, said that of all the mediums her sister works in, weaving is “her favorite in her heart”.

The Bark Painting Award this year recognized a work titled Yunupingu (the rock) by D Yunupingu of Yirrkala, who died in 2021.

A collaborative work by Bonnie Burangarra and Freda Ali Wayartja from Yilan in the Northern Territory won this year’s Wandjuk Marika Memorial 3D Award. The work is titled An-gujechiya.

A video work by Jimmy John Thaiday of Erub in Torres Strait, entitled Beyond the lineswon the Multimedia Award this year.

The Emerging Artist Award, given to an artist in the first five years of his practice, this year went to Louise Malarvie of Kununurra, for a work entitled Pamarr Yara.