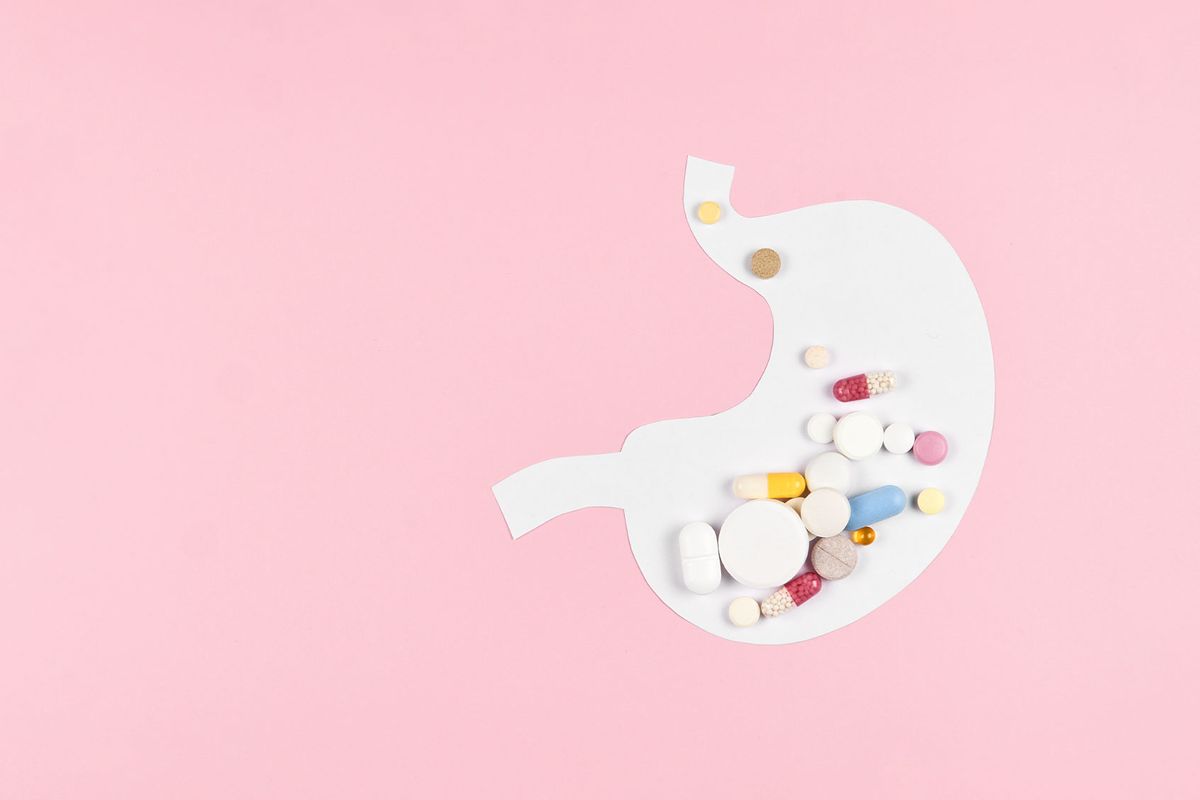 As far as medical emergencies go, this one was pretty straightforward to say the least. On a cloudless early morning, I rode an Uber to the hospital as my 18-year-old daughter sobbed next to me and puked into a plastic bag. She had had surgery three days earlier to remove her wisdom teeth. Now there was a violent uprising inside her. The source of her pain? Her painkiller itself, in the form of a prescription bottle of ibuprofen.

Non-steroidal anti-inflammatory drugs (NSAIDs) are among the most commonly used drugs in the world. They relieve pain by blocking the production of the enzyme cyclooxygenase. That process, in turn, inhibits the production of prostaglandins, which leads to less swelling and inflammation. You probably have several over-the-counter and prescription NSAID variants in your medicine cabinet right now – aspirin, ibuprofen, naproxen, celecoxib. They’re what you reach for when the menstrual cramps hit, you overextend at the gym, your arthritis or back pain flares up. Robert H. Shmerling, MD, writing in 2020 for Harvard Health that about “15% of the U.S. population regularly uses an NSAID (including those available over the counter) and that, along with “sporadic users,” adds up to “more than 30 billion doses… taken each year.”

Usually it is a good thing to take NSAIDs. Appropriate medication means not missing days of work or school. It means being able to participate in precious activities. Even now, there is a growing body of research looking at the use of NSAIDs in patients to help fight the opioid epidemic. With a fifth of us living with chronic pain, managing it effectively is a serious issue — and a fundamental right.

NSAIDs can be tough on your stomach — harder than you ever expected.

But NSAIDs can be tough on your stomach — harder than you ever expected. Speaking to Mayo Clinic News Network in 2018, primary care physician Dr. Summer Allen notes that “one of our biggest concerns with NSAIDs for patients is the fact that it can lead to bleeding in their GI, or stomach lining or tract.” That can be particularly risky for people who use them regularly or for a long time. The Canadian Society of Intestinal Research estimates that “15-30% of long-term NSAID users are at risk of developing ulcer disease, with 2-4% of these ulcers leading to complications.”

Where things get even trickier — like sitting on a stretcher connected to an IV drip for 12 hours inconvenient — is in the ever-expanding realm of adverse drug interactions, comorbidities and over-reception. Consumer Reports notes that “more than half of us now regularly take a prescription drug — an average of four.” And they don’t all play equally well together.

RELATED: This Is Why Your Stomach Hurts

Are you one of the approximately 20 million Americans who take antidepressants? A 2021 study from Creighton University School of Medicine found that for patients already taking NSAIDs, adding SSRIs meant “increased the odds of developing upper GI bleeding by 75%.”

Are you taking blood-thinning drugs, ACE inhibitors, beta-blockers, or other NSAIDs? All of those combinations can cause stomach irritation or other side effects.

Do you have Crohn’s disease? NSAIDs can make your symptoms worse.

Are you over 65? More than a decade ago, research in the Journal of the American Medical Directors Association warned that chronic NSAID use “increases the risk of stomach ulcers, acute renal failure and stroke/myocardial infarction” in the elderly.

By the time we heard the word “gastritis,” she had been in the hospital for half a day.

But even for the otherwise perfectly healthy people, there are important considerations to understand before taking NSAIDs. A 2016 report in the British Journal of General Practice warns, “From day one of use, all NSAIDs increase the risk of gastrointestinal (GI) bleeding, myocardial infarction and stroke.” And in yet another example of the boomerang effect, research out of Canada released last month suggests that taking “drugs like ibuprofen and steroids to relieve short-term health problems could increase the likelihood of developing chronic pain” .

My daughter was already on two prescription drugs at the time of her jaw surgery, including the NSAID Naproxen. After her procedure she came home with two Lake prescriptions – one for ibuprofen and one for antibiotics (which can also lead to stomach problems such as diarrhea, cramps and even in some cases C. Diff infections). In retrospect, she is lucky that she didn’t react worse to everything than she did.

Her symptoms didn’t seem NSAID related at first. They didn’t look like a digestive system at all. Her first complaint was severe back pain, followed shortly after by abdominal pain. By the time it moved to her stomach, she was vomiting. By the time we heard the word “gastritis,” she had been in the hospital for half a day.

My daughter’s experience was far from unusual, even within my own family. Three years ago, while my oldest daughter was on medication and recovering from an autoimmune disease, she had a brand new gastroenterologist for all the NSAID side effects she had developed into the bargain. The American Journal of Medical Care estimates that “11% of preventable drug-related hospitalizations can be attributed to NSAIDs,” noting that some figures put the annual number at “more than 100,000 patients in hospital for NSAID-related GI alone.” complications.”

So what can you do to end the cycle of pill popping and stomachaches? First, weigh the risks and benefits. Talk to your doctor about all the medications you take, including over-the-counter medications, before a new procedure or prescription. If you’re in pain, don’t go for a “more is more” attitude and exceed the recommended dosage. A 2018 study from Boston University found that approximately “15 percent of adults taking ibuprofen or other NSAIDs exceeded the maximum recommended daily dose for these drugs… increasing their risk of serious side effects such as internal bleeding and heart attacks.” Take your NSAIDs with food and avoid irritants such as alcohol. And don’t hesitate to see your doctor or go to the hospital if you experience severe and persistent symptoms.

“The best way to avoid complications from taking NSAIDs is to talk to a medical professional. If you experience pain for more than three days, you should have an exam and be evaluated to see what the underlying cause of pain is says Ashley Allen of Allen. Health & Wellness, a nurse specialized in pain relief. “Often there are other more appropriate medications that can be given to treat a condition. For example, if someone has a sinus headache, it may be best for them to be treated with antibiotics for an infection or an antihistamine to reduce swelling, not NSAID: For some individuals, it may be appropriate to also take a proton pump inhibitor such as Prilosec (omeprazole) to protect the stomach lining from damage.

My daughter is lucky. She is young and strong; she has come back well from the oral surgery itself. In her surprising detour to the hospital, she received excellent and thorough care that found no other underlying conditions. But her gut is still recovering from the flamethrower effects of her recent experience, and her doctor put her on a bland diet of small meals for two months. It is no small feat to spend so long actively fighting off pain.

And it’s a chronic problem for many of us, with us making our way through bottle after bottle of ibuprofen, soon followed by bottle after inevitable bottle of Pepto Bismol. I don’t think it’s a coincidence that a Consumer Healthcare Protection Association’s list of the best-selling over-the-counter medications in America places oral analgesics high on the list—with heartburn remedies right behind it.