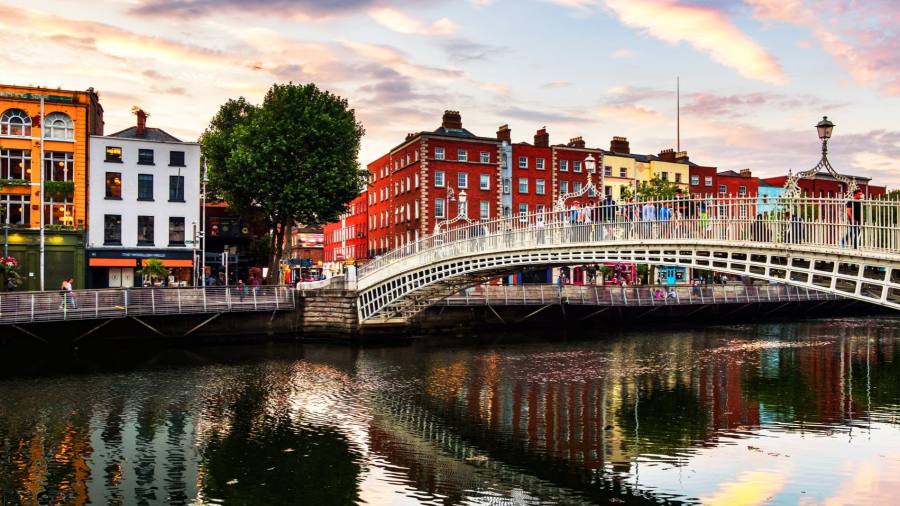 Who wants to be a millionaire? Well, in Ireland, where household net worth is at an all-time high, one in eight households already is. On paper, at least.

According to new central bank data that examines how wealth is distributed across a country of 5.1 million people, 12 percent of households have net worth of €1 million or more, compared to just 5 percent in 2013, when Ireland left the recession came. .

Indeed, Irish households have amassed record wealth of more than €1 trillion – a combined nest egg that has grown by €544 billion in less than a decade, according to preliminary data on the distribution of wealth accounts. The Irish are avid savers and spend almost a fifth of their income, more than in almost any other country in Europe. But most of their wealth is due to the value of their property.

And therein lies the problem: according to the central bank, housing accounts for almost two-thirds of the wealth increase of the wealthiest 10 percent of Irish households, and 80 percent of the middle class. So if you want to get ahead, buy a house. But that’s easier said than done: prices have skyrocketed even above the levels of the Celtic Tiger boom years of the mid-1990s to the late 2000s, and the problem is exacerbated by the lack of supply.

Rents across the country have also skyrocketed, in the third quarter at “by far” their highest quarterly rate since 2005 and by 14.3 per cent in the year to September in Dublin, according to a report by Ronan Lyons for estate agents Daft.ie. Unsurprisingly, more people than ever are homeless: 11,000 relied on emergency shelter in September, says charity Focus Ireland.

Opposition leader Mary Lou McDonald has gained support for her left-wing Sinn Féin party, largely by promising to solve the housing crisis. As she told lawmakers in the Dáil this week: “Soon only the very wealthiest will be able to live in our cities.”

Many young people despair of ever being able to rent or buy and want to emigrate.

While shopping in an affluent Dublin suburb, 69-year-old Barney, a retired dentist, admits to being a paper millionaire. He felt he was buying at the wrong time when he paid off his mortgage in 1988. “But compared to today, any time was the right time,” he says. People like him saw their property values ​​soar during the boom.

In contrast, Megan Brown, a 25-year-old teacher, along with her partner and their 17-month-old son, must “live with my mother.” They can’t afford to rent let alone buy in Dublin where they work. “It’s definitely a generational thing. Maybe someday,” she sighs.

The cost-of-living crisis and the prospect of hundreds of redundancies in Ireland’s high-earning technology sector conspire to put pressure on future millionaires.

The European Commission said this week that Ireland had “one of the highest [housing] price-income ratios in the EU”. The US consultancy Demographia, which analyzed house prices in various international markets in relation to incomes, concluded that Dublin had become “severely unaffordable”.

The poorest 50 per cent of Irish households can take comfort in the fact that they have become a little richer in the past decade. The shrinking mortgage debt increased the share of the bottom 50 percent of net worth to 7 percent of the total, from just 2 percent in 2013, the central bank said. The share of the richest households fell from 60 percent to 54 percent.

But mortgage payments are rising again, and according to the Daft.ie report, renting can be nearly twice as expensive as buying, even accounting for higher rates. Progressive taxation means that income inequality is greater than in some countries. According to an analysis by the Financial Times, Ireland’s poorest have living standards two-thirds higher than those of the UK’s poorest. But wealth inequality remains huge.

This bolsters Sinn Féin’s prospects. “The increase in wealth has its mirror image in the ‘exclusion’ of people from the housing market,” said David McWilliams, an economist. “So if one sector gets rich, the other sector becomes isolated.”

Or, as Brown says, “I’ll never be a millionaire unless I win the Lotto.”