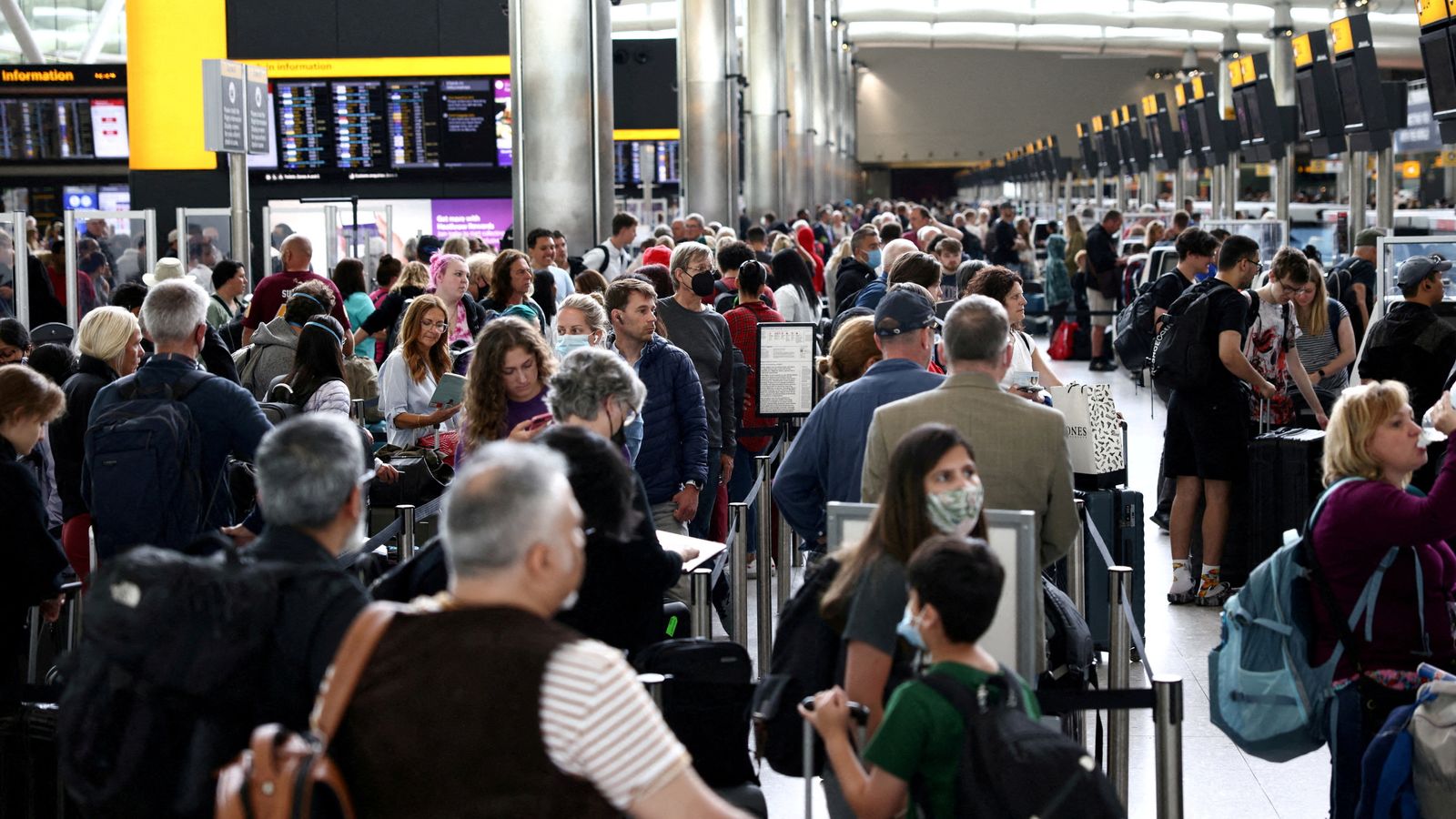 In the last year, a total of 381,459 people have been granted the right to work in the UK, the highest number since registration began and more than double the last comparable figure from 2019.

So why is the UK economy still struggling with a lack of people to fill jobs?

Unemployment is historically low, but the number of unfilled vacancies has never been higher.

The Office for Budget Responsibility (OBR) says there would be 1.2 million more people in the UK workforce today if it had grown at the same rate over the past 18 months as it did from 2010 to 2020. Where are all the missing workers?

The UK is seeing the highest net migration since measurements began

One theory is that the large number of work visas being issued is because workers from EU countries who were already living in the UK before Brexit had to apply for a visa to keep their jobs.

That would mean that these record numbers are not new people being added to the workforce, they are the same people with a new work status category. However, the theory does not stack up.

There was an alternative “right to stay” for these workers during the Brexit transition period, before the UK formally left the EU, which is separate from a work visa.

And even since that route has come to an end, the recent increase is mainly driven by workers from outside the EU.

These immigration figures are a legitimate record rather than a statistical oddity, but they are surpassed by the record number of people leaving the UK workforce.

There are an additional 393,000 people registered as long-term sick compared to March 2020. There are 318,000 more students who have delayed entry into the workforce due to poor job prospects during the pandemic or delayed higher education opportunities.

That’s almost 200,000 more than the 631,058 work visas issued to workers who came to the UK from abroad during the same period – many of which were temporary anyway.

And that’s before we get into the additional 25,000 working-age deaths during the pandemic, or the net loss of around 50,000 EU citizens, the vast majority of whom will also have been in work.

They are not included in the table below because the exact number in this category is not clear.

With a growing overall population, it would not be enough if the numbers in and out of the labor force even reached parity with each other. Demand is also growing.

It is not an exact science to determine exactly how much impact each vacancy has on overall economic growth and vacancies in different roles will contribute to a greater or lesser extent depending on their productivity.

However, the OBR says higher-than-expected immigration was the only upside between their March growth forecast and the one last week that followed Chancellor Jeremy Hunt’s economic plan details.

Madeleine Sumption, director of the Migration Observatory at the University of Oxford, said: “Having a larger workforce is quite helpful [for GDP].

“You effectively have people coming in. You’re not paying to support them while they’re kids or young adults or for their education, and they’ll immediately add to the workforce.”

What is the government doing to close the gap?

The 2019 manifesto had a promise that did not mention numbers, only that an “Australian style points system” would be introduced to give the UK more control over who enters.

That system came into effect on January 1, 2021. While it marked a distinction from freedom of movement for EU citizens during Britain’s time in the Union, many of the requirements were relaxed at the same time.

Alp Mehmet, chairman of Migration Watch UK, said: “The removal of key controls on work immigration – including the removal of the limit on work permits and the requirement to advertise vacancies in the UK first – have all contributed to the number of work visas issued. shoot up.”

According to the own definition of government most of the people who have been issued visas under the new system are “skilled workers”.

Nearly 170,000 visas have been issued to skilled workers in the health and social care sector, plus 140,000 other skilled workers, out of a total of 550,498 visas issued under the new regime.

However, the balance of where the vacancies lie does not always match where people are eligible to apply for visas.

For example, the accommodation and hospitality sector is currently the most understaffed, with 6.9% of all vacancies unfilled by October 2022, equivalent to 152,000 jobs.

Only 7,550 visa applications have been submitted for manufacturing jobs under the new scheme. There are no figures on how many of those were successful – but even if they were all of them, that would equate to just 5% of the shortfall.

The Data and forensics team is a versatile unit dedicated to providing transparent journalism from Sky News. We collect, analyze and visualize data to tell data-driven stories. We combine traditional reporting skills with advanced analysis of satellite imagery, social media and other open source information. Through multimedia storytelling we want to better explain the world and at the same time show how our journalism is practiced.