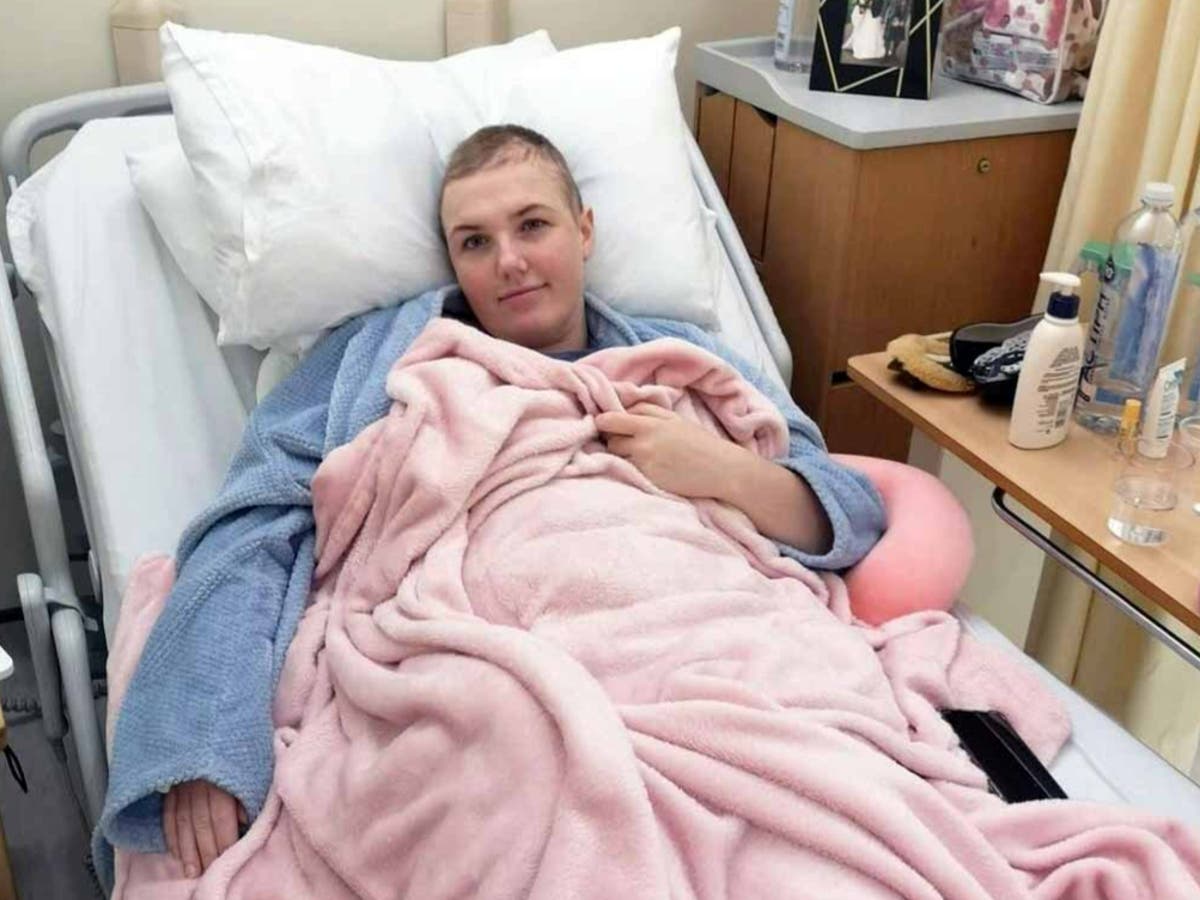 A woman who thought she was having a heart attack at a music festival was stunned when she was diagnosed with a rare cancer four hours later.

Errin Shaw, 30, was enjoying Snow Patrol at TRNSMT in Glasgow when she was gripped by crippling pain – even asking her husband if she had been stabbed.

She was rushed to Glasgow Royal Infirmary and just four hours later was told she had gray zone lymphoma, a rare form of the disease that affects the immune system.

Errin, from Inchinnan, Renfrewshire, had suffered from itchy skin for months before being diagnosed in September and told she would not see Christmas.

She underwent grueling e-poch chemotherapy, which consisted of 24 hours of treatment for five days, before coming off with breaks of one to two weeks.

Dose-adjusted e-poch chemotherapy is a combination of chemotherapy used to treat certain types of non-Hodgkin’s lymphoma.

This process was repeated five times with only ten days during an eight month period when Errin was not at the Beatson Cancer Center due to the complexity of her treatment.

Errin said: “I was at TRNSMT in Glasgow Green, we were listening to Snow Patrol and I actually thought I was having a heart attack.

“I turned to my husband Graeme and said ‘have I been stabbed?’ and he said no, so my mom came to pick us up.

“She took me straight to the Glasgow Royal and within four hours I was diagnosed with cancer.

“I was there for three or four nights and then went straight to the Beatson – so I never went home for a month after TRNSMT.”

In June of this year, Errin received a call from her cancer nurse to say that her scans were clear and she was in remission.

Errin said: “My phone rang and it was the Beatson.

“Every time my phone rang and it said ‘Beatson’ I always looked at whoever I was with and said ‘pack my bag’ because we knew it meant going back inside.

“It was my lymphoma nurse, Michelle, and she said, ‘I can’t wait for your appointment on Monday to tell you this news. We actually had to check it three times because we can’t believe your PET scan is clear.”

“She said no disease had been diagnosed at that time.

“As you can imagine that was out of the blue and last year I was told I wouldn’t make it past Christmas to hear that. It was a crazy moment.”

Beatson Cancer Charity is launching its Bauble Appeal this Christmas to ensure more patients and their families are supported.

Errin has since held a ball called the ‘Gingie Ball’ to celebrate being in remission, which raised £5,375 for Beatson Cancer Charity.

She also plans to visit the Beatson West of Scotland Cancer Center on Christmas Day to distribute gifts to patients after visiting the wards last Christmas.

Erin said: “There are no words for the Beatson, I wouldn’t be here without them.

“Obviously we raised thousands for the Beatson because when you get there you experience first hand how amazing they are, they are phenomenal.

“I can’t say enough about it – from the assistants to the porters to the cafe ladies.

“When you ring the doorbell and the whole team is cheering you on, the fundraisers that helped with my prom — everyone just wants you to do well when you go in there.”

Rachel Mullin, campaign officer at Beatson Cancer Charity, said: “We are delighted to launch our Bauble Appeal with the support of some patients and family members who have been kind enough to share their stories.

“They all have first-hand experience of the Beatson and the difference our patient charitable services make.

“We would be grateful for any support you can give us this Christmas so that we can continue to be there for patients and families in the West of Scotland.”