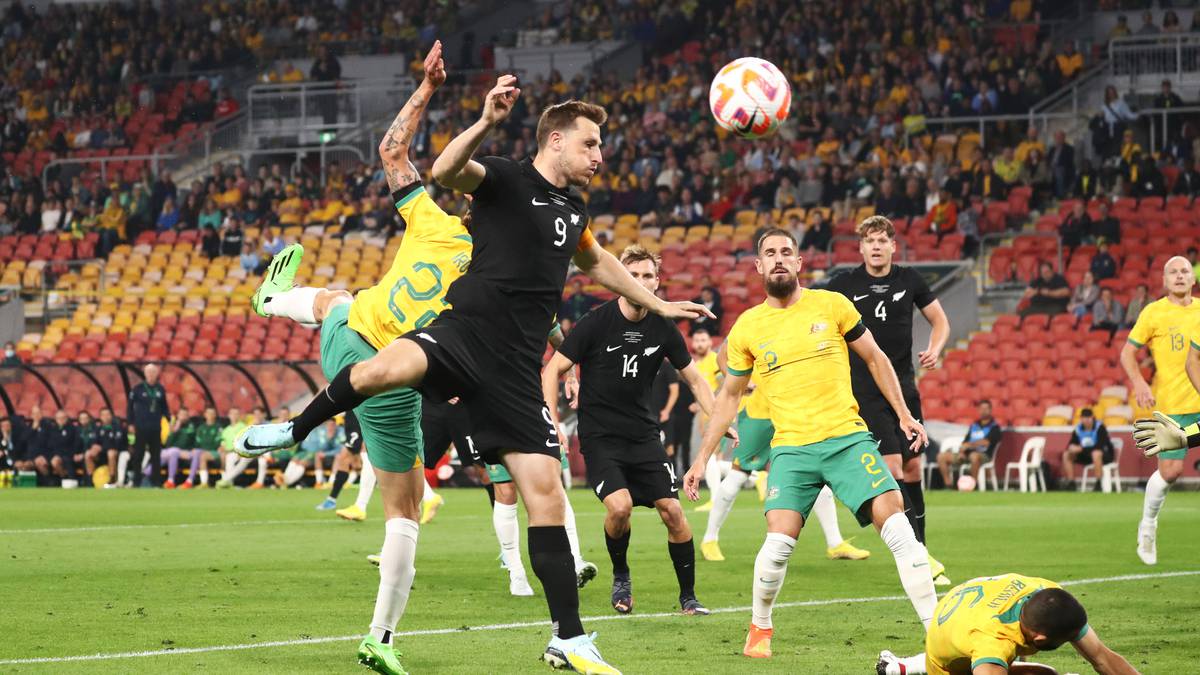 Chris Wood seems to be looking for a connection with a free kick against Australia. Photo / photosport.nz

By Michael Burgess in Brisbane

The New Zealand side put on an impressive display against the Socceroos on Thursday night, but fell 1-0 to the home side in an exciting game.

The match had echoes of Costa Rica’s Doha play-off in June, where the quality and output of the All Whites was not fully reflected on the scoreboard.

Despite being $5.50 underdogs at the Australian TAB, Danny Hay’s men more than matched their highly vaunted opposition.

A lightning strike from Socceroos winger Awer Mabil in the 32nd minute proved the difference after a counterattack from the home side.

After waiting so long for a trans-Tasman match, this was a beauty, in front of 25,392 fans at Suncorp Stadium.

There were plenty of chances on both sides, with Andre de Jong missing the best for New Zealand, while Oli Sail tapped a late attempt by Mathew Leckie on the post.

Given the circumstances, it was a promising effort from the All Whites, boding well for Eden Park this Sunday, when they are likely to throw the sink at the Socceroos with their strongest XI.

It was difficult to nominate a standout for New Zealand, although Libby Cacace, Matt Garbett and Eli Just were particularly prominent, while Michael Boxall got off to a great start in a rare start.

The only negative to the match was an overtly physical approach by the Socceroos – mostly with impunity by the Japanese referee – with Cacace, Garbett and Just the target of some cynical challenges.

The All Whites had a challenging build-up, with players arriving late to camp from all over the world. That required a number of different selections, with regulars Alex Greive, Marko Stamenic and Bill Tuiloma on the bench, while Winston Reid was rested for his farewell match at Eden Park, to reduce the risk of an untimely knock.

Hay opted for a back three from Tim Payne, Boxall and Nando Pijnaker, with Dane Ingham and Cacace on the flanks. De Jong, Joe Bell, Garbett and Just formed the midfield quartet, led by Chris Wood.

There were six starters from the Costa Rica clash in June, while Australia was close to full strength, with most of the XI being so crucial in the qualifying play-off against Peru in Doha.

The All Whites got off to a brilliant start, with Payne testing the keeper from 20 yards in the second minute, after jumping forward from a timely interception.

The visitors quickly found their rhythm and should have opened the score in the 10th minute, with De Jong losing a golden opportunity. The South African forward pushed his shot wide of the near post after winning the race to a Wood flick on following a sail clearance.

It was a precious moment, even though De Jong had only got out of a plane 48 hours earlier in defense.

Payne and Garbett had attempts on target, while Cacace made a beautiful turn into the area, but his driven right-footed shot went wide.

The fast Cadiz winger looked dangerous all along, scoring the crucial goal in the 32nd minute. It was a beautiful attack from 20 meters, just inside Sail’s post, after Bell lost possession halfway through. It was tough for Bell, who enjoyed a productive first half and contributed to the neat triangles produced by Hay’s team.

The All Whites pressed for a response and had plenty of ball in the final third, but crosses failed to find their target. Garbett made good contact from long range but straight for the keeper, while Wood was tackled well by Trent Sainsbury as he lurked on the edge of the area.

New Zealand was again impressive early in the second half with a lot of penetrating football, but lacked quality on the last cross. A Bell pile driver, after a respectable De Jong was put out of action, was unfortunately straight for the keeper, while Cacace stumbled after a long outburst in Australian territory.

McCowatt was denied by a brilliant tackle in the six-yard box – after a searching Waine cross – while a free kick from Garbett was just too high. Sail produced a brilliant save to push an attempt by Leckie into the post in the 85th minute, after a quick counter-attack, which proved to be the last chance for both teams.