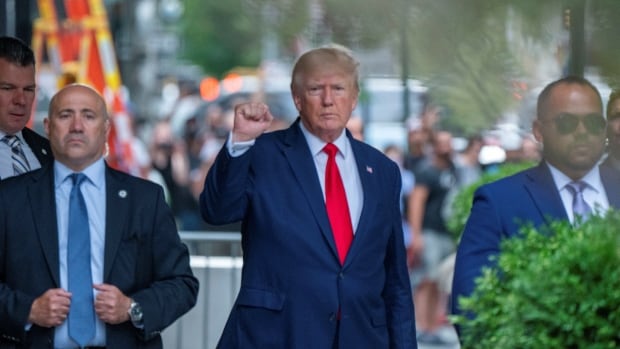 Former President Donald Trump will be questioned under oath on Wednesday in the New York Attorney General’s long-running civil investigation into his dealings as a real estate mogul, he confirmed in a post on his Truth Social account.

The New York civil investigation, led by Attorney General Letitia James and lasting three years, includes allegations that his company the Trump Organization has misrepresented the value of valuable assets such as golf courses and skyscrapers, misleading lenders and tax authorities.

“Tonight in New York City. Tomorrow a racist NYS Attorney General, continuing the largest witch hunt in US history!” Trump wrote to Truth Social, citing his oft-repeated claims about James, who is black, and the investigation.

“My great company, and myself, are under attack from all sides,” Trump said. “Banana Republic!”

Trump lost all legal challenges in his attempt to avoid giving testimony. It was scheduled for last month but was postponed after the death of his first wife, Ivana Trump, on July 14.

James, a Democrat, has said in court files that her office has found “significant” evidence that Trump’s company “used fraudulent or misleading asset valuations to obtain a variety of economic benefits, including loans, insurance coverage and tax deductions.”

How much will Trump say?

The Republican billionaire’s statement — a legal term for affidavits not given in court — is one of the few remaining missing pieces, the attorney general’s office said.

Trump’s two adult children, Donald Jr. and Ivanka, have testified in recent days in the investigation, said two people familiar with the case. The people were not allowed to speak in public and did so on condition of anonymity.

Trump could invoke his Fifth Amendment right against self-incrimination and refuse to answer questions from James’ investigators.

Trump rejected the practice of taking the Fifth on the campaign trail in September 2016, as he spoke about his opponent Hillary Clinton’s investigation in which she used a private email server while she was Secretary of State.

Allen Weisselberg, chief financial officer of the Trump Organization and Eric, Trump’s son, each invoked the Fifth Amendment more than 500 times when questioned by James’s attorneys during separate statements in 2020, according to court documents.

The former president could choose to do the same, but it’s likely that “he will claim lack of knowledge on many questions,” said Stephen Gillers, a law professor at New York University.

As vocal as Trump has been in defending himself in written statements and onstage, legal experts say the same strategy could backfire in a deposition environment, as anything he says could potentially be used against him or his company in the criminal investigation. .

“On the other hand, his impetuousness makes him a lawyer’s nightmare and his hubris can lead him astray. Whoever questions him will encourage it,” Gillers said.

James alleges that the Trump Organization exaggerated the value of its assets to impress lenders or misrepresented what land was worth to lower the tax burden, citing the annual financial statements given to banks to help them secure favorable loan terms. and to financial journals to justify Trump’s place among the world. billionaire.

The company even exaggerated the size of Trump’s Manhattan penthouse, saying it was nearly three times its actual size — a difference in value of about $200 million US, James’s office said.

VIEW | The execution of an order usually leads to charges, the ex-federal prosecutor says:

The search for former US President Donald Trump’s Florida home has tantalized his supporters and opponents alike. Meanwhile, the US Department of Justice says very little about the raid, in which FBI agents reportedly seized several boxes of documents.

Trump has denied the allegations, explaining that seeking the best valuations is common practice in the real estate industry.

Once her investigation is complete, James may decide to file a lawsuit and demand financial sanctions against Trump or his company, or even a ban on them from being involved in certain types of companies. The Trump Foundation was previously dissolved in an investigation overseen by James, in which Trump paid a $2 million fine for its misuse.

Trump’s testimony comes at a critical point in James’ investigation, halfway through a pivotal week in his post-presidency.

FBI agents searched his Mar-a-Lago estate in Florida on Monday as part of an unrelated federal investigation into whether he took classified records as he left the White House.

Republicans have steadfastly supported Trump after the operation, sometimes using inflammatory language. Florida Governor Ron DeSantis characterized the law enforcement activities as “a new escalation in the arming of federal agencies against the regime’s political opponents,” citing the Biden administration, and some members of Congress called for the dismantling of the FBI.

While James has been investigating charges against Trump or his company, the Manhattan district attorney’s office has long held a parallel criminal investigation, though it appears to have stalled after a new district attorney, Alvin Bragg, took office in January. .

A grand jury that had heard evidence was dissolved. The top prosecutor who handled the case resigned after Bragg internally raised questions about the viability of the case.

On Friday, Weisselberg and the Trump Organization will appear in court to seek resignation from tax fraud filed against them in the Manhattan District Attorney’s criminal investigation last year. Weisselberg and the company have pleaded innocent; he is accused of collecting more than $1.7 million in off-books compensation.