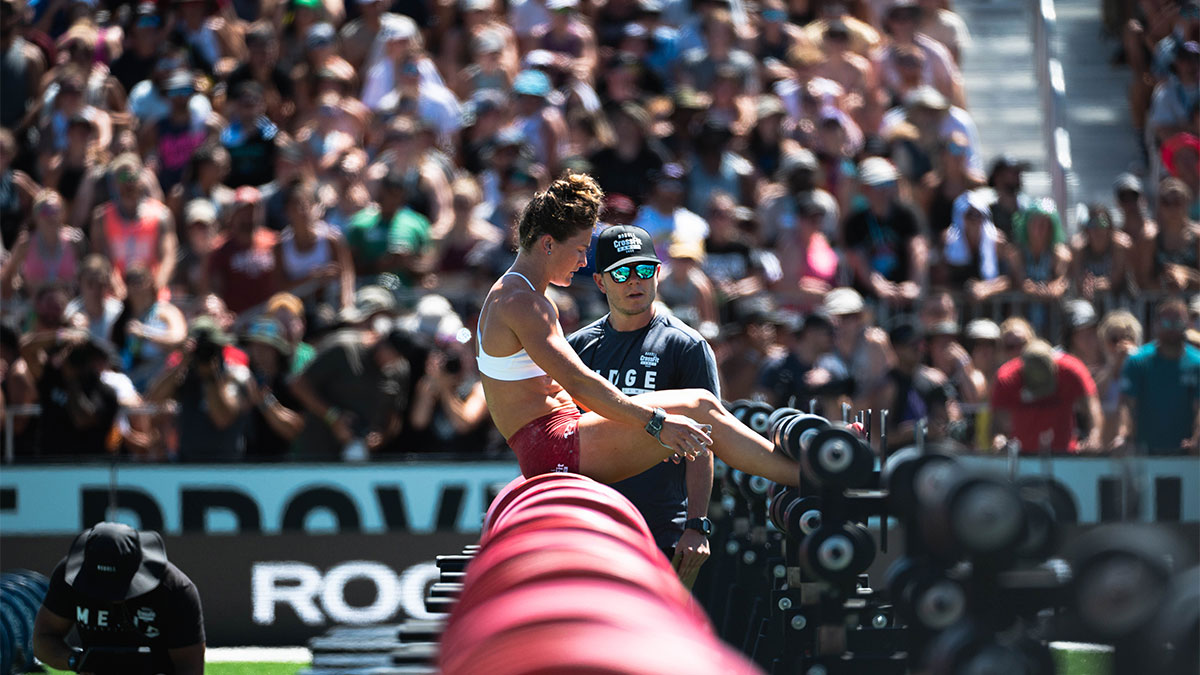 The third morning of the 2022 CrossFit Games started with mild temperatures and clear, sunny skies. All divisions were scheduled to enter the competition floor, including three events for the individuals.

The first event of the day was also the first event announced earlier in the week. It was a souped-up version of the Burden Run of the 2013 Games that started with 20 pig flips, then a 3.5-mile run, followed by a 200-meter Jerry Bag carry and a 200-meter Husafell carry, which included the climb the 49 stairs at the Wisconsin state headquarters to the finish at the top.

The bottom 20 men and women on the standings went first and it was Travis Mayer who opened up a big lead early in the run after flipping the pig. Bayden Brown and Alex Vigneault were next in line. On the women’s side, Ellie Turner took charge of Seher Kaya coming out of the pig flips. Mayer finished the run in 23:26 and set the time to beat on the men’s side, after climbing the stairs, with a heat win at 32:16. Kaya and Turner battled back and forth as they climbed the stairs as the lead changed hands several times with Kaya making a late attack to take Turner’s win at the finish.

In heat two it was Roman Khrennikov and Jayson Hopper out first for the men, Khrennikov pulled away mid run but Lazar Djukic caught him close behind them, Ricky Garard made a move and chased the leaders. Towards the end of the run section, Garard, Khrennikov and Djukic formed the lead pack with Djukic pulling slightly forward. Krennikov regained the lead after the Jerry Cans and then it was neck and neck between Krennikov and Garard on the stairs. When the dust settled, Garard took the win at 31:54, with Khrennikov right behind him at 32:01.

Amanda Barnhart was the pig first for the women, Laura Horvath was just behind her. By the halfway point, however, Haley Adams had taken the lead with Tia-Clair Toomey and Gabi Migala behind her. By the time they got to the strange objects, Adams had opened up a big lead over the other women. On the Jerry Can carry, Adams started chasing the men in front of her and took 4th place overall. But then Adams struggled with the Husafell bag and Gabi Migala caught up with her on the stairs and took the event win at 33:34. Laura Horvath passed her as did Toomey and Wells. Adams finally managed to get her bag across the finish line in fifth place. Third place put Toomey in first overall, two points ahead of Mal O’Brien.

Individual Event Six: Up and Over

The second event of the day was a chipper style workout with three rounds of 12 ring muscle ups, 25 jump overs (including a log, high box jump and pig jump over) and 30 GHD sit ups , followed by an 84-foot axle bar dropout (185 pounds for me, 125 pounds for women).

The men entered the field first and it was the first Italian to qualify from the regional or semi-finals, Enrico Zenoni setting the time to beat at 14:18, while Brent Fikowski took second in the heat a few seconds later. . In the second heat Khrennikov took a small lead on the first lap. But by the end of the finish lap, Saxon Panchik had taken over and went into the second set of ring muscle-ups first with BKG, Garard and Ohlsen not far behind. On the second lap, Panchik opened up a big lead, but Patrick Vellner, who had been hanging out just outside the top-five for the first part of the week, was just behind.

On the last lap, Garard made up some space, but Panchik grabbed the axle bar well ahead of him before the lunge. Panchik took the 100 points at 12:40 PM when Medeiros and Garard battled it out, with Medeiros second and Garard third. Panchik took his first event win of the week.

It was the women’s turn next, and in the first heat Rebecca Fuselier, who struggled to complete “The Capitol” earlier in the day, took an early lead. Mayhem athlete Baylee Rayl overshadowed her on round two, but together they opened up a big lead over the rest of the field. On round three, Rayl separated himself as Fusilier and Elena Sanahuja battled for second place. Rayl set the time to beat at 14:15, while Fuselier took it out to take second in the heat at 15:55.

In the second moto, Toomey took the field for the first time this week with the white leader’s jersey. And the reigning champion took an early lead and went unbroken in the first set of muscle-ups. O’Brien, Kristi Eramo-O’Connell and Emma Lawson were right behind. Toomey completed her second set of toroids unbroken as well. On the second lap, Adams moved up to fourth as O’Brien and Lawson tried to hold on to the pressure.

On lap three, Toomey broke into her muscle-ups for the first time, but kept her lead. She completed practice in 11:58 and smashed the top time of heat one. O’Brien came in second, handing over just 3 points to Toomey and staying within five points overall. Lawson was third in the event followed by Haley Adams who knocked out Danielle Brandon at the last minute.

The final event of the day was a verse of Echo Bike calories and handstand pushups, but it was a new take on the move for the CrossFit Games, the strict deficit handstand pushup. Athletes had to walk on ballistic blocks and then descend into the push-up and dive under a tape line on the blocks. The training had a time cap of 10 minutes for the boys, 12 minutes for the women.

The men were first on top and in the first heat of ten Andrew Houdet set the time to beat at 7:44 and Colton Mertens looked strong at 7:55. In the second heat, Zenoni came out well ahead of his competitors and crushed Houdet’s time from heat one, taking the lead at 7:07 and his second heat win of the day. In heat three, Jayson Hopper, Will Moorad and Travis Mayer battled it out half way through. However, it was Moorad whose handstand pushups won the day and he completed the event at 6:30am with Hopper behind him at 657am.

The podium was set for the final heat and Khrennikov was the first off the bike on lap one with Noah Ohlsen close behind. Halfway through, Khrennikov had a big lead as Garard fell in the bottom half of the heat. Ohlsen faded as Panchik moved into second place. Khrennikov took the heat win at 7:02 but was third behind Moorad and Hopper. Meanwhile, Garard stalled on his last set of handstand pushups and failed to finish the event under the time limit.

The women closed out the day and in the first heat Caroline Spencer took an early lead with Seonyoung Choi just behind her. Spencer set the first time to beat at 8:36, Choi was second in the heat at 9:31. In the second moto, Dani Speegle and Alex Gazan came out on top with Paige Powers close behind. Speegle and Powers battled it out to the end of the heat with Speegle at 8:57 and Powers behind her at 9:24.

The third heat started with Matilde Garnes picking up the pace on the bike. Laura Horvath was in the heat and has struggled consistently with strict handstand pushups throughout her career and halfway through the timecap she hadn’t gotten past her first set of handstand pushups, while Emma McQuaid came out to a strong lead. McQuaid set the new time at 8:01 as the final heat watched from the beads.

Toomey had her race face on at the start, but it was Mal O’Brien who got off to a hot start, as did Alexis Raptis. Toomey slammed into the wall toward the back of the pack, but did her first set of handstand pushups unbroken. Lawson was also in the mix in the middle of practice. Raptis had a strong lead as Toomey did her second set of handstand pushups again unbroken. Raptis kept up her pace as Toomey tried to chase her, but the rookie managed to win the event at 6:48am, more than a minute faster than McQuaid. Toomey was second at 7:47am to create more distance between her and O’Brien.

For a daily summary of all things CrossFit. Community, competitions, athletes, tips, recipes, offers and more.