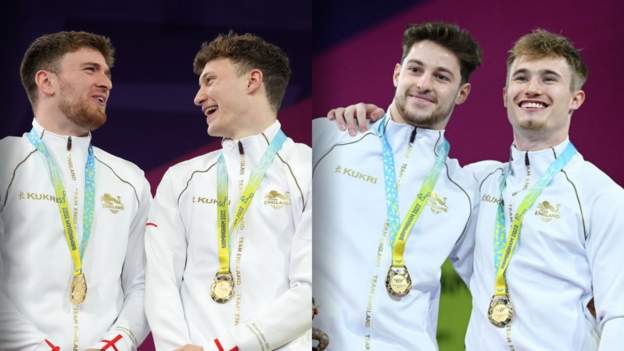 It marked Olympic champion Lee’s first Commonwealth medal of any color as he and Williams – silver medalist in 2018 – scored a total of 429.78 points.

“During the Commonwealth Games, I never did exactly what I wanted to do,” Lee told BBC Sport.

Lee, 24, won Olympic gold in Tokyo with Tom Daley in this event, but when Daley took a break from the sport, he teamed up with 22-year-old Williams earlier this year.

Together they won silver at the World Championships in June, with gold in their second major match as a couple in Birmingham.

They finished with 15.93 points ahead of Canadian Rylan Wiens and Nathan Zsombor-Murray in silver medal position, while Australian Domonic Bedggood and Cassiel Rousseau took bronze.

“This is what I dive for. This is why I achieved what I have. It’s just competing. Especially in front of a home crowd. You don’t get better than this,” added Lee.

“You don’t often get a chance to do this. We’re so lucky to be able to do it – I mean, that wasn’t luck out there, that was pure skill – but we’re lucky to get gold up front from a home crowd. I am ecstatic.”

“I think me and Tony wanted to take this to mean that we wanted another good performance under our belts. Tony certainly achieved that. I still have some things to improve on.”

Laugher and Harding topped the standings from their first dive, but it wasn’t until their third dive – a 3.4 difficulty forward two-and-a-half somersault with two twists in the pike – that their dominance began to show.

Their highest score of 88.92 points came on their penultimate dive, the same point where Malaysian pair Chew Yiwei and Ooi Tze Liang – who were chasing them in second – slid down to finish last.

“This is my second international in two or three years,” said Harding.

“The 3m men in Britain is so hard, it’s so hard to get on the big stage and I’ve worked so hard. I’ve had to be patient, I’ve had to wait for it. It’s thanks to Jack for me in training see, see how good I can be and trust in me and believe in me.”

Laugher and Harding didn’t make their partnership debut at the World Championships until June, taking silver on that occasion.

Their Birmingham total was higher than Laugher’s gold medal-winning totals with Mears at the previous two Commonwealth Games.

Speaking about his partnership with Harding, Laugher said: “We’re really good friends and we have a lot in common. I think our diving styles are very similar.

“He deserves this. He’s a great athlete and he finally got his chance and he really grabbed it, and that’s something I need in my career – someone with motivation and drive to want to be the best and lit my fire to keep.”

“I’ve been doing this for a long time and I’ve got someone new on the scene, who’s ready to go, I think it’s really good and I think the synchro collaboration is obviously great and we’ve got some great this year gigs and I just can’t wait for the future.”