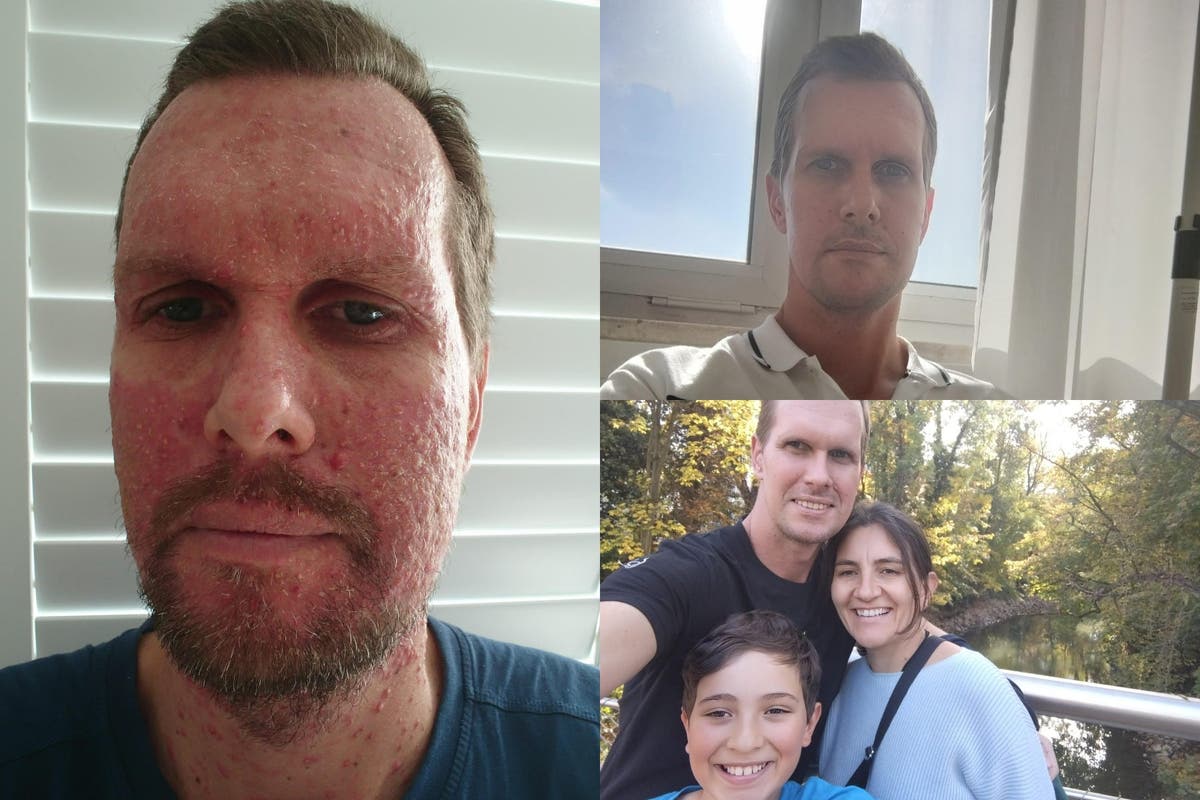 A fit and healthy father with stage four cancer says he looked like the “Nightmare on Elm Street” after a horrific reaction to chemotherapy left him too embarrassed to attend his young son’s cricket matches – and now hopes to save his life with a breakthrough vaccine.

Geoffrey Seymour, 41, a procurement specialist, loved tennis, basketball and cricket and had always been healthy until just before his 41st birthday when he began to see blood in his stools.

Geoffrey was aware that this is a symptom of cancer from television advertisements, so he quickly went to see his GP.

Geoffrey, who lives in Richmond, London, with his wife Santa, 44, and their son Marco, 10, was diagnosed with stage four colon cancer, which had spread from his colon to his liver – a situation so serious and seemingly hopeless was that he likened it to “being wrapped in a paper bag on fire”.

He also responded poorly to chemotherapy, which severely blistered the skin on his face and, according to Geoffrey, made him resemble Freddy Krueger from the 1984 horror film, Nightmare on Elm Street.

However, the chemotherapy ended and now, in an attempt to save his life, Geoffrey has traveled to Germany for dendritic cell therapy – where a personalized vaccine is being made in a laboratory with the aim of boosting the immune system.

Research in this area is at an early stage, according to Cancer Research UK, so the treatment wasn’t cheap – just one injection in Germany, on October 17, cost £17,000 and Geoffrey is now waiting to see if it was enough to help him, as he continued to raise money to pay for it.

He said, “I couldn’t even wait for the fundraiser to end to get it done, just because I’m so scared the disease would spread.”

Geoffrey was determined to find a new approach after three sessions of five doses of chemotherapy failed and left him with side effects so bad that he no longer wanted to go out in public, not even to watch his infant son play cricket.

“I had a really bad reaction in my face, it was full of painful blisters that made my face feel like it was on fire,” he said.

“I just got to the point where I kind of looked like Nightmare on Elm Street. Unless I went there with a bag on my head, other people would come up and look at me and think, ‘What’s wrong with this man?’ when I’m quite happy to blend in with the crowd.

Geoffrey’s ordeal began in April 2021, just two weeks before his 41st birthday on March 4, when he began to experience the first warning signs of cancer.

After seeing blood in his stool, Geoffrey decided to see his GP as he knew it could be a symptom of cancer. And in late March, at Kingston Hospital, he was diagnosed with stage four colorectal cancer, which had spread to the liver.

After diagnosis, in March 2021, he underwent five cycles of chemotherapy every three weeks that initially reduced the lesions in his liver. At this point, he says he felt “optimistic.”

In December 2021, he had surgery to have a third of his liver removed, and the medical team began preparing him for radiotherapy to be used on his colon – he even had radiomarkers tattooed for the laser alignment.

A month later, a scan showed more tumors in his liver, so he received another round of chemotherapy. This time it was a success and liver surgery was booked for June 2022.

But just when things were looking better, a few weeks before surgery, a scan revealed disease progression. Geoffrey was again given chemotherapy with a different agent and the operation was cancelled.

After just two cycles, blood work and a scan showed disease progression again, while the side effects became unbearable for Geoffrey.

He said, “The side effects have gotten worse, worse, worse, and now chemotherapy just isn’t effective anymore, the body has gotten used to it.”

Explaining why he reacted badly to a chemotherapy drug, he said: “Essentially it kills all your fast-growing cells, including your cancer cells, but also your hair and nails. I had a really bad reaction to that in my face.

Determined to find an alternative, Geoffrey started doing his own research by searching online and found dendritic cell therapy, only to be told it would not be available to him in the UK.

He decided to fly to a lab in Ulm, Germany on October 17, 2022 to undergo the week-long treatment. Friends and family gathered to contribute to his Go Fund Me appeal, which raised over £14,000 and helped fund the £17,000 injection.

“I’m still in pain, I’m in a lot of pain, I’m trying to find a good balance of very strong drugs,” he said.

Geoffrey has a meeting with his oncologist in the UK on November 1, but he knows he may have to pay for more vaccine doses and more treatments abroad and continues to raise money to pay for it.

“To make the vaccine, scientists grow dendritic cells next to cancer cells in the lab. The vaccine then stimulates your immune system to attack the cancer. It is still being researched, so the evidence base is not yet strong enough to be available in the UK.

“Decisions about the best course of treatment should be based on solid evidence of benefit – so it’s important that patients talk to their doctors about any alternative treatment they’re considering.”

She added: “Thanks to ongoing advances in research, there remain many new cancer drugs that are showing their effectiveness in clinical trials and offer potential options for people with cancer.

“However, although regulators have improved the speed with which they assess these for routine NHS use, unfortunately there are still times when certain medicines are not yet easily accessible to people who could benefit from them. We understand how frustrating this can be.”