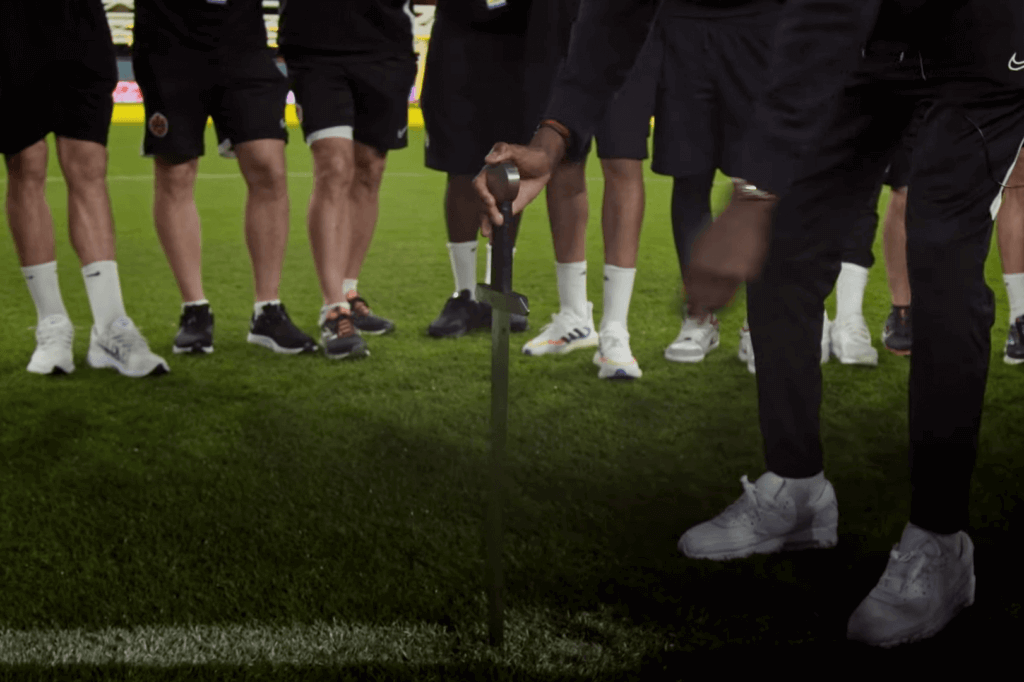 When Canada started the 2022 World Cup, they did it by slamming a sword into the ground.

Yes, this Canadian team travels with a sword devised by coach John Herdman as a means of embodying this team’s warrior spirit and the night before their spirited loss to Belgium on Wednesday, they did as they had for every game in the last round of World Cup qualifying and shoved a sword into the middle of the field they will play in.

Why are they doing it?

The sword is the most memorable of John Herdman’s unorthodox methods of team building and personal inspiration. He has played with other medieval imagery, from shields to symbolize the need to defend with purpose and helmets that can only look ahead to symbolize sticking to the task.

But it’s the sword that resonates because, as Herdman said after Canada qualified for the World Cup, it represents “the swagger we want to play with”.

During the last round of qualifying for the Concacaf World Cup, the Canadian ritual went like this: the team gathered in a circle in the half of the stadium in which they were to play the night before the game. A member of the team took the sword, and, after a short speech intended to goad the group, would drive the sword into the field. Herdman wanted the team to believe they would “own their turf”, as he said after qualifying, and for most of qualifying Canada did just that.

Where does the sword come from? What does it say?

Before the final qualifying round, Toronto-based swordsmith Steve Karakostas received a vague email instructing him to create a sword “as a symbol of brotherhood on an important international quest”.

Karakostas was skeptical that this sword was actually for the Canadian men’s national team until a visit to their hotel room during qualifying convinced him and he got to work.

The sword is decorated with the words “Qatar 2022” and, more importantly, the Latin phrase “Nihil timendum est” or “Fear nothing”.

It’s that phrase that typifies the team’s all-out offensive approach and the newfound courage that has long been missing from the psyche of Canadian men’s soccer.

“It has been our symbol throughout the journey,” midfielder Jonathan Osorio said The athletic in the mixed zone after the loss against Belgium. “Of course we had to bring it here. It symbolizes the warrior (spirit) of our team. It’s our weapon. It represents our ambition.”

How did they get through customs?! And who carries it on board?

It is unclear how the team got through customs, but they managed to get it through qualifying in other Central American countries.

“We did it,” Osorio said with a smile.

When not used in pre-game conversations, the sword lives in the team’s conference room.

What happened in Costa Rica?

Canada suffered only two defeats in the final round of World Cup qualification. The second came away to Panama after Canada had already qualified. But the first came in Costa Rica. Canada had a chance to qualify, but as we learned the day after their 1-0 loss, Costa Rican customs wouldn’t let the sword enter the country.

A Costa Rican news agency ran a story the next morning, tipping the world off about Herdman’s latest tactic to stir up team spirit at the time.

You can call Canada’s loss to Costa Rica pure coincidence because they didn’t have the sword with them, sure.

After the loss, Karakostas told the Toronto Star, “I’m not a superstitious man, but after this I might be.”

How did they get it in Qatar?

Getting the sword into the country probably wasn’t an overnight process. We know that Herdman is meticulous in his planning and in order to get the sword through customs, he and the rest of the Canadian outfit would probably have started planning for this shortly after qualifying.

We probably haven’t seen the last of the sword in Qatar either.

“It goes in every stadium to symbolize that we will own their ground and be New Canada,” Herdman said in March.