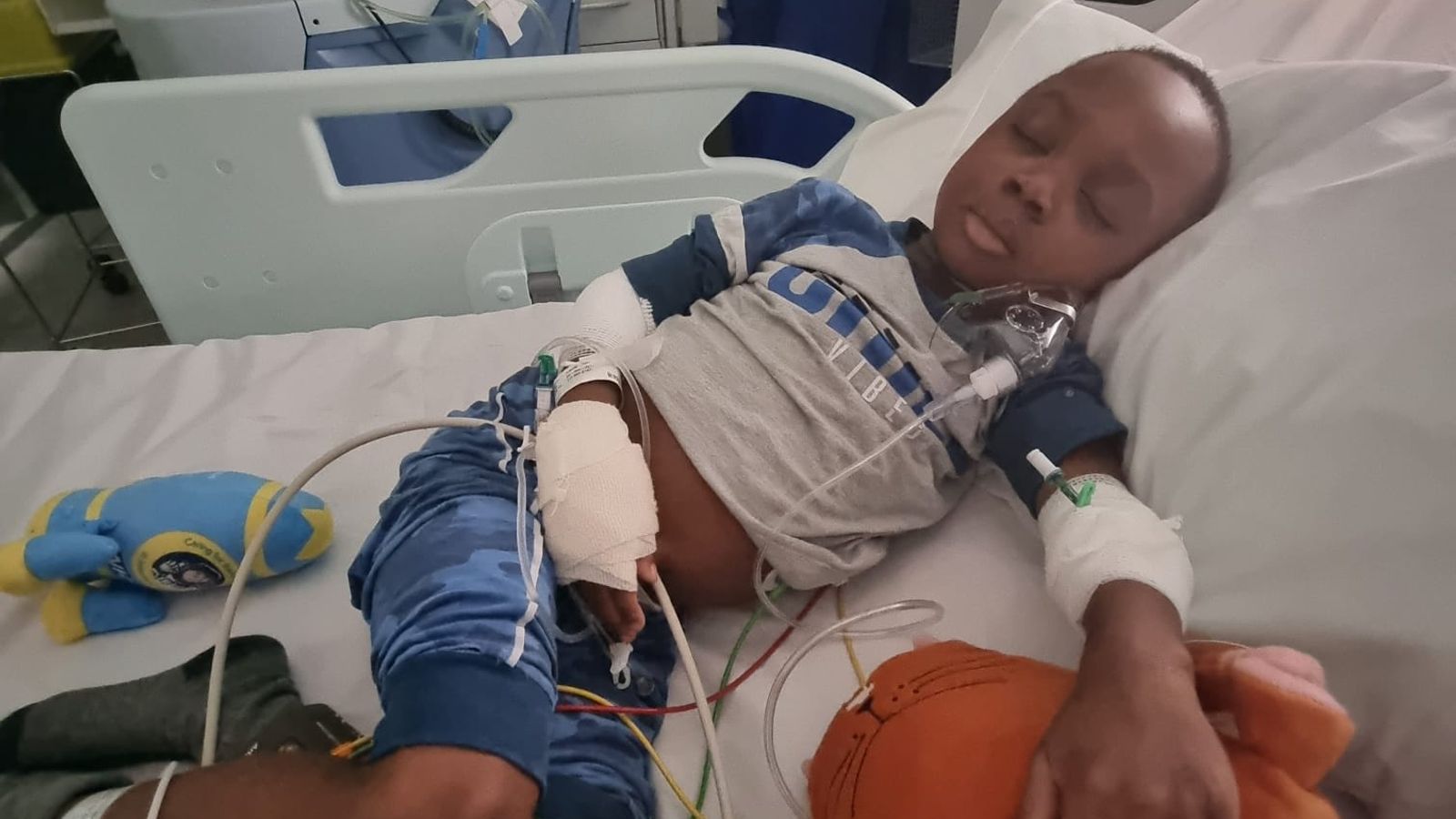 David Aibuki looks like a normal, healthy, happy five-year-old boy. He’s a little shy when we first meet, but soon warms up when I start talking about Christmas.

His little brown eyes light up when he tells me he asked Santa to bring him a gold racing car this year.

I ask David if he’s been good to earn his present and he replies “Yes!”

His smile fills the room.

I don’t know if David has been good. But I do know that he has been extremely courageous.

He sits on a bed in a specialist pediatric ward at St Mary’s Hospital in Paddington. David was brought here two weeks ago and admitted to the hospital’s PICU (pediatric intensive care unit) during what his mother describes as a “terrifying” ordeal.

David has sickle cell disease. His mother Bola Aibuki keeps a close eye on him and when he told her he was in excruciating pain and said his “bones were broken” she knew his little body was under attack.

She took him to her local hospital where doctors diagnosed the flu. That meant that with his underlying health issues, David was in excruciating pain and his health was under serious threat.

“David would never say if he’s in pain, I’d just assume he’s in pain. But when David said my bone was cracking, I was sure something was wrong with him,” Bola told me.

Managing David’s condition can be difficult at the best of times, but the added infection made David very sick. It was a painful time for his family.

Bola described her fear to me: “It was terrifying, I can’t even contain myself. I tried my best, the nurses really tried their best to distract me, but all I did was look at my own son lying there, helpless . It’s just too much real for any mother to go through.”

David was placed in the care of Dr. Liz Whittaker. She immediately recognized the complexity of David’s case and proceeded to provide an urgent blood transfusion to help David’s body fight off the infection.

“There are a lot of kids coming in, they’re all pretty sick, there’s a shortage of beds,” explains Dr Whittaker.

“We’re always concerned about flow, we try to get everyone moving through the system so that every child can get the care they need. We’ve set up community treatment to make sure we have access to get patients out of the hospital. to get.

“But November is always a stress point and anything we can do to try and limit the number of patients is really a good thing.”

Read more:
Hospital flu cases 10 times higher than last year amid ‘triplemic’ warning
NHS leaders are more concerned about this winter than any previous
Flu infections are on the rise again, with young children most affected

They already see that in hospitals. And as soon as RSV cases decrease, the flu starts to increase. So there is no delay for medics like Dr. Whittaker and her team.

Senior pediatricians have told me that there is an acute shortage of PICU beds, especially in the south of the country.

Dr. Whittaker said it was “one patient out and one patient in” at her hospital. Data from NHS England appears to show that just 33 spare PICU beds were available in the country last Thursday. That’s less than at any point last winter.

Health analysts say this rise in respiratory disease cases was to be expected in the winter. Mitigation measures during the pandemic prevented flu and RSV from spreading as normal. But it also means that most young children have not been exposed to these viruses before.

David is recovering well and is looking forward to going home to spend Christmas with his family and look forward to his golden racing car.

But Dr. Whittaker and her team know David’s bed won’t be empty for long.