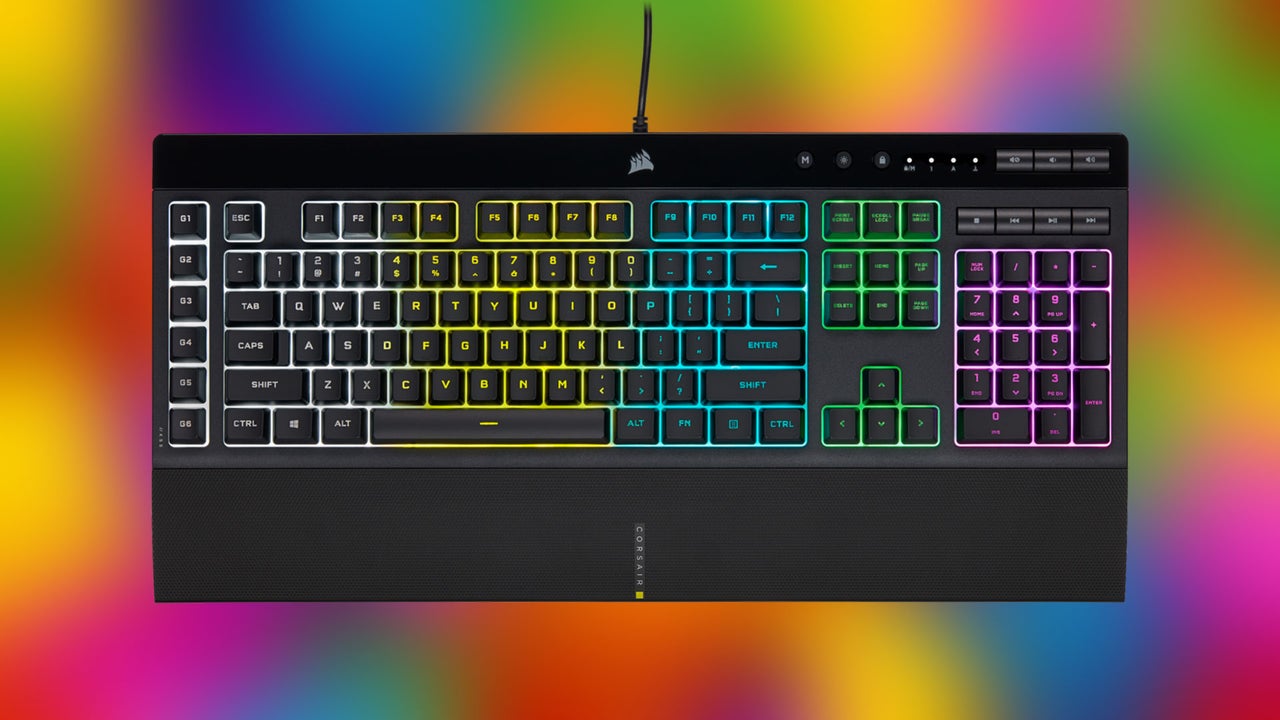 Yes, it pays to invest in a nice set of gaming peripherals that are built to last and help you win. But an excellent gaming mouse, keyboard and headset don’t have to cost a fortune. There are also impressive options on the budget end.

When it comes to cheap gaming keyboards, for example, you’ll find a handful that are top-notch in performance, construction, and features. Even if some sacrifices have been made and they aren’t tournament worthy to lower their prices, these cheap gaming keyboards deliver where it matters.

The best cheap gaming keyboards are just the ticket for budget-conscious gamers who either don’t have the cash or just don’t want to spend a lot on peripherals. Here are our top picks:

TL; DR – These are the best budget gaming keyboards:

Corsair’s line of premium gaming keyboards is epic to say the least, but its cheap offering has a lot going for it too. For example, the Corsair K55 RGB Pro is one of the best cheap gaming keyboards out there, with a 1000Hz polling rate that is standard on most keyboards – even expensive ones – onboard memory and IP42 protection against spills. It’s not fully programmable unfortunately, but it has six dedicated macro shooting keys to make you faster and more efficient during intense battles. If you’re a game streamer, you can even assign streaming commands to these keys via Elgato Stream Deck software.

Like the keys, the RGB lighting here is not programmable per key. However, it does have five RGB lighting zones, which you can customize with different lighting and lighting effects. Best of all, you get all of that for under $50, which is a fraction of the cost of most top gaming keyboards out there.

The SteelSeries Apex 3 TKL is proof that a gaming keyboard doesn’t have to be expensive to keep up. This $45 option ticks many things off the list, including water and dust resistant, silent switches that are ideal for late night gaming, and it even has adjustable legs for your gaming comfort. Aside from the dedicated media keys, it’s also fully macro-programmable, making it a great budget choice for RPG, MMO, and MOBA gamers.

That’s not all; This feature-rich keyboard offers gaming-grade anti-ghosting on the most frequently used gaming keys, built-in three-way cable management, and eight customizable RGB lighting zones. Simply put, it’s packed with great features and delivers solid performance you wouldn’t expect from a keyboard under $50. And if you like this in a full version, the SteelSeries Apex 3 comes with pretty much the same features.

If you’re looking for a fully programmable keyboard that does more than just macros, consider the Razer Cynosa Chroma V2. This is a great membrane switch keyboard that activates when you need it, even in the most intense moments, thanks to its 1000Hz polling rate. It’s so responsive that membrane keyboard haters like to overlook the fact that it’s less than satisfying feedback.

On top of the keys you can customize; the per-key programmable RGB lighting and 22-zone Underglow lighting are also blessings for RGB fans. Of course, the dedicated media keys are incredibly useful, as is the built-in cable management. It’s slightly more expensive than our other picks on the list, but at $60, it’s nothing too extravagant for budget-conscious gamers, especially considering all you get.

The Logitech K845 is unlike any gaming keyboard you’ve ever seen. In fact, Logitech has gone to great lengths to prove that a gaming keyboard can look as sleek and elegant as the best productivity keyboards. Make no mistake though; this mechanical keyboard is just as great for gaming as it is for typing emails and documents. As long as you’re not looking for tournament-level performance, that is.

You even have a choice of mechanical switches so you can get the one that feels most comfortable and satisfying to you. It’s a bit minimalist in features, with only five lighting patterns on hand for backlighting and no macro shooting. However, it’s an excellent budget keyboard if you need one to get through all your computing needs, including casual gaming. Plus, for an option under $80, you get a robust option rated for up to 50 million clicks.

The RGB lighting on the Roccat Magma can overwhelm you. Or maybe you absolutely love it. The 5-zone, 10-LED RGBA backlight doesn’t just illuminate the symbols on the keys; it makes the entire keyboard deck glow beautifully. Of course, it doesn’t just look good; it also performs beautifully. Not only are the keys silent, thanks to the silent membrane switches; they are also fast and accurate at the game level.

Of course, its advanced anti-ghosting technology and Roccat Easy-Shift[+] button duplicator, which gives you a second set of functions in the WASD zone, should also help with your gaming performance. That’s a lot of premium features on a gaming keyboard that’s now $50. It even has a detachable wrist rest, which to be honest is nothing to write home about, but it adds to its value.

Michelle Rae Uy is a freelance tech and travel writer, part-time production editor, and a full-time traveler from Los Angeles, California. She currently splits her time between Los Angeles, London and the rest of the world. Follow her on Instagram @straywithRae.