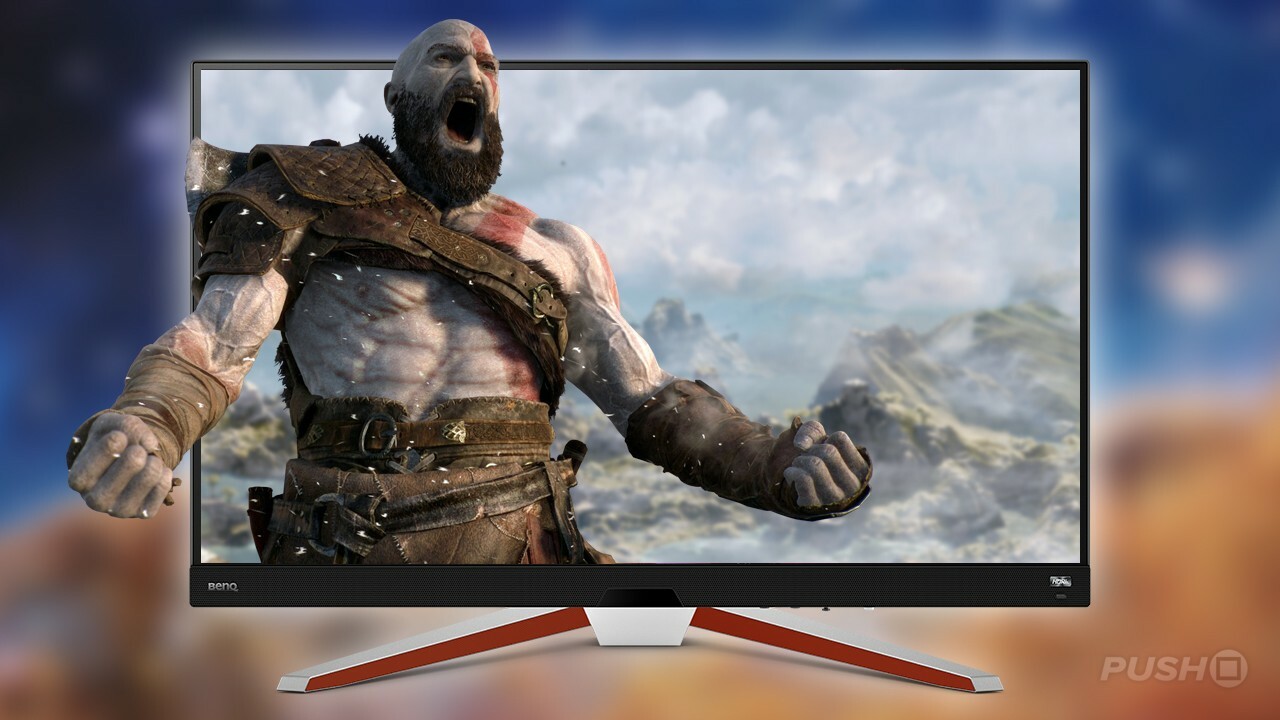 There are buttons and a joystick discreetly placed on the underside of the panel, and these can be used to adjust various settings on the display. Handily, though, BenQ has also included a small remote control, which is a little unusual for monitors of this type, but gives easy access to various presets and our preferred option is to fiddle with the menus. If you don’t feel like dealing with another plastic item on your desk, the built-in inputs mentioned above work just fine and feel solid and tactile.

In terms of ports, you get the mandatory DisplayPort for your PC, as well as two HDMI 2.1 ports for 120fps output, four USB ports and a 3.5mm headphone jack. Everything is neatly organized and easily accessible, so you shouldn’t have too much of a headache swapping cables if you’re the type of person who switches through different tech devices on a regular basis. It’s worth noting at this point that you can adjust the DisplayPort and HDMI settings independently, which is useful if you plan on using this monitor for both PC use and PS5 gaming. We personally prefer a darker, more subtle image when browsing spreadsheets, and a brighter, more vibrant image when playing console games, and the EX3210U can deliver.

As we mentioned at the beginning of this review, picture quality is paramount when it comes to choosing a display, and in our opinion, BenQ has delivered on its lofty promises. The IPS panel used by the EX3210U is rich and vibrant, thanks to a truly impressive color palette. There are a ton of presets to play around with, although we personally liked playing around with all available parameters in the Custom setting the best. The key here is the flexibility the monitor allows, and it really does offer a plethora of options if you want to experiment – as well as some useful “out-of-the-box” configurations if you don’t want to potter around.

One thing to note, though, is that in SDR you’ll experience a peak brightness of around 250 nits on this monitor, which is low compared to other options on the market. While you can force HDR on all content – which ultimately results in a much brighter image, as you’d expect – it might not always be accurate if it’s not natively supported. Therefore, if you intend to use this in a relatively bright environment, the SDR output may look dull and dull. It’s definitely worth considering where you’ll be placing the monitor and how it will be affected by daylight; we didn’t have too many problems with our setup, but skylights and large windows could end up obstructing the view, we suspect.

Light bleeding can also be a problem, although your mileage can vary a lot on this front. We saw some blooming and spilling in the corners of the panel, but nothing overly aggressive; this can unfortunately amount to a manufacturing monopoly, so if you pick up one of these you’ll want to test it thoroughly in the dark to see if your unit is affected. While this can be an unfortunate issue, we have to say that the viewing angles on the monitor, along with the overall clarity at 4K resolution, are excellent.

And the HDR is also quite striking. There is some debate over whether the device actually reaches the required brightness of 600 nits WHERE HDR, with some tests pegging it just below. All we can say is that games like God of War Ragnarok and Horizon Forbidden West really shine on this screen, with vibrant colors and excellent clarity across the board. Add to that the support for 120fps gameplay – where the software allows – and you can get some seriously smooth action on this panel, with very little ghosting or artifacts. According to various professional tests, the input lag is limited to only 4 ms, which is slightly slower than some high-end 1080p monitors, but still fantastic for twitch based games. For those of you planning on using this for both PC gaming and PS5, it should be noted that there’s AMD FreeSync Premium Pro and NVidia G-Sync compatibility too.

There are also some proprietary features worth mentioning. For example, the Light Tuner claims to analyze in-game lighting in real time and brighten up certain aspects of the image that appear too dark. We assume this is for those survival horror games where you’re tempted to crank the brightness all the way up to get a better view of what’s going on. We fiddled with this during some of the darker parts of God of War Ragnarok – most notably the catacomb area in Svartalfheim – but ultimately opted to turn it off entirely, ultimately feeling it didn’t provide enough additional clarity to sustain . Your mileage may vary. There’s also a Black Equalizer option which just wipes out a lot of contrast in our opinion.

Also of interest is a Blur Reduction meter, which tries to eliminate motion blur in games. The goal here is to provide a smoother, cleaner overall image, but at the cost of overall screen clarity. As we’ve mentioned elsewhere in this review, this isn’t the brightest monitor to begin with, so that’s why we left it out. It’s also worth adding that many major games have their own motion blur toggle in the settings these days, and while this isn’t a universal option, it’s becoming more common.

We’d be remiss to close this review without mentioning the built-in speakers, which aren’t the panel’s main selling point, but are a real differentiator. From our perspective, these are the best built-in speakers we’ve ever experienced on a gaming monitor, although it should be noted that the bar isn’t exactly set high – even on previous BenQ displays we’ve tried. The subwoofer on the back doesn’t really boom, but delivers just enough bass to provide a rounded sound, which is much better than the tinny sound you usually get from devices like these.

There’s no equalizer, so you can’t tailor the audio to your taste, but there are a few presets inspired by specific genres and scenarios, such as Sports and FPS. You can also have the PS5’s Tempest 3D audio output through the monitor’s speakers, and this adds some nuance to the positioning of sounds, especially in titles like Returnal, which have an exceptional overall mix. It’s important to underline that this will never replace a good standalone speaker setup or a high-end headset, but it’s usable enough for quick local multiplayer FIFA 23 sessions or watching a show on Netflix, and that’s what makes it huge superior to virtually any other gaming monitor on the market.

Conclusion: buy or not buy

Should you then buy the BenQ Mobiuz EX3210U? Well, first you need to determine whether you actually want a television or a monitor. The price is ultimately comparable to the 42-inch LG OLED C2, which has a negligible increase in input lag, but can clearly produce a much brighter image overall. In that sense, if you’ve got the free space available and aren’t specifically looking for a screen that you can also use with a PC, we’d probably recommend going for the TV.

But if you prefer a gaming monitor, this is a good option. Sony’s recently released INZONE M9 comes with a range of PS5-specific features, such as Auto HDR Tone Mapping, and we actually prefer the aesthetic of that panel. However, at 27-inches, it’s slightly smaller than this BenQ option and lacks the high-quality built-in speakers here. Meanwhile, if you’re willing to spend a little more, the Samsung Odyssey Neo G8 is future-proofed with its 240Hz refresh rate – a first in the 4K monitor space.

All in all, though, the BenQ Mobiuz EX3210U is a good option, combining vibrant HDR image quality with best-in-class built-in speakers and negligible input lag. As it nears its first birthday on the market, it could perhaps do with a small price cut, as competition in gaming monitors is brutal right now. But if you can find it at a discount, possibly during a Black Friday salethen this is a solid choice for PS5 and PC gaming.

Thanks to BenQ for providing a sample of the Mobiuz EX3210U for testing. Let us know if you have any comments about the panel in the comments section below, including whether you’re using a gaming monitor in your personal setup.

A true PlayStation veteran, Sammy has covered the world of PS gaming for years, with a huge number of trophies to prove it. He also likes tennis games much more than you do.