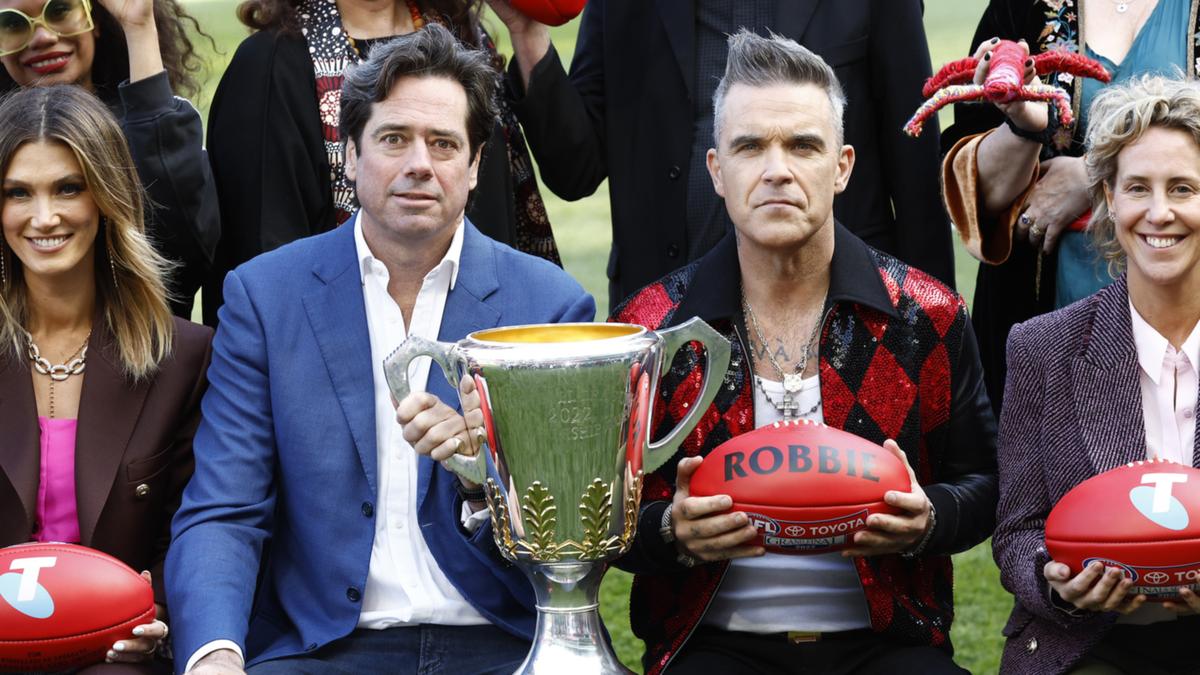 It’s been a bad week for the AFL, with grotesque allegations of mistreatment of First Nations players in Hawthorn, which should be a celebration of the best the game has to offer.

So it must have been a relief for chief executive Gillon McLachlan and other bigwigs to divert the issue for a media opportunity with some of the entertainers who will be rocking the grand finale at the MCG on Saturday.

WATCH THE VIDEO ABOVE: A high-heeled Delta Goodrem shows off amazing footy prowess at the press conference.

Analysis, local footy and the biggest moments, Seven and 7plus are home to footy shows for every fan. Stream them all for free on 7plus >>

But was there a hidden message among all the fanfare?

British hitmaker Robbie Williams was among the artists on the floor with McLachlan on Thursday to promote the lineup, which also includes Delta Goodrem, G-Flip, Katie Noonan, Ngairre, Goanna, Tasman Keith, The Temper Trap and Mike Brady.

Then, among the rest of the bling, there was the silver bracelet emblazoned with the words “f*** off”.

“I do know a little bit about footy,” Williams told reporters.

“I haven’t fully picked a team that I’m going to support in the regular play area and I’m not picking a team for the finals.. and I don’t want the other half (of the audience) booing at me while I’m singing.

“Honored to be part of the occasion.”

1.25 pm – Welcome to the Country by Uncle Colin Hunter Jr

Grand final teams: Ultimate heartbreak for young Swan after the bomb was omitted